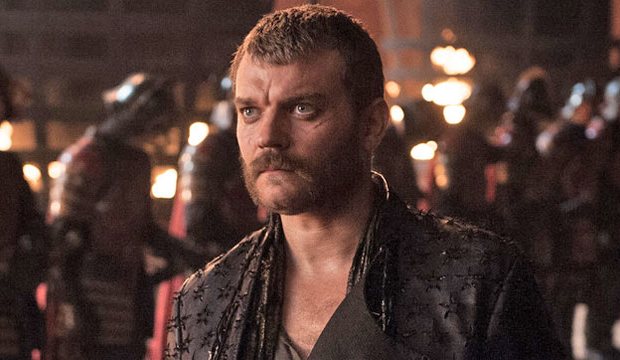 In the Season 7 premiere of “Game of Throne,” Queen Cersei (Lena Headey) finds herself surrounded by enemies. The only person to turn to is the dastardly pirate, Euron Greyjoy (Pilou Asbaek). Euron is rebuffed by the Queen when he proposes an alliance or power and marriage, but pledges to return with a “gift” that will prove his loyalty. What gift could Euron possibly have planned? The show, and “A Song of Ice and Fire” novels, provide subtle hints of what could be in store. Take a look at the most probable gifts below, and then let us know your guess by voting in our poll.

Gendry – Gendry (Joe Dempsie) was last seen in a row boat in Season 3, and his whereabouts are currently unknown. Is it possible that Euron picked up the Baratheon bastard on his way back to the Iron Islands? Presenting Cersei with the last remaining Baratheon would be a coup for the Queen. Citizens are mostly unhappy with Cersei’s rule, but also weary of a Targaryen returning to King’s Landing. Cersei could publicly kill off the last Baratheon and rally support from houses afraid of dragon Queen Daenerys (Emilia Clarke).

Tyrion – Cersei hates few people more than her little brother Tyrion (Peter Dinklage). This is somewhat due to the fact that Cersei murdered most of her rivals, but Tyrion killed their mother in childbirth, executed their father Tywin, and is now aiding Daenerys in her quest to take the Iron Throne. Is Euron’s first act of war a storming of Dragonstone? He could demonstrate the power of his navy and kidnap or kill Tyrion. Nothing would make the Mad Queen happier.

Theon/Yara – Euron clearly wants his siblings dead (he and Cersei have that charming trait in common). Presenting the Queen with the heads of Theon (Alfie Allen) and/or Yara (Gemma Whelan) may seem like a gift for himself more so than for Cersei. However, with these two gone, Euron would surely be able to convince Yara’s Ironborn to return to his side. This would likely give him the biggest fleet of ships in the world, capable of taking on the Mother of Dragons and defending King’s Landing.

Dragonhorn – In George R.R. Martin’s novels, Euron claims to have a “dragonhorn” from Meereen during the King’s Moot. It is said that dragonhorns were used in Old Valyria to control dragons via magic. This precious item has never been mentioned in the HBO series, so it is unlikely to be revealed so late in the game. It’s also entirely possible that Euron lied about the horn’s properties in the novels, and simply possess an ornate musical instrument. Still, the ability to control Daenerys’ dragons and use them against her would certainly level the playing field.