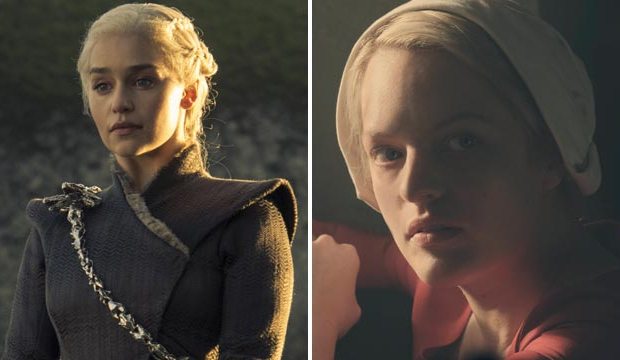 Would “The Handmaid’s Tale” still have won Best Drama Series at the Emmys if “Game of Thrones” had been around? The HBO epic fantasy won 12 Emmys in 2015 and another 12 in 2016, shattering the records for the most wins by a series in a single year and the most overall wins for a primetime series — late night sketch comedy “Saturday Night Live” is the only program on TV with more overall wins. But “Thrones” had an unusually long hiatus so it didn’t return in time to compete in this year’s Emmy cycle. That left the door wide open for “Handmaid’s” to take eight total awards. But what would have happened if it had gone head-to-head against the summer season of “Thrones.” Vote in our poll below.

Of the eight awards won by “Handmaid’s,” four of them were won by “Thrones” in 2016: Best Drama Series, Best Drama Writing, Best Drama Directing, and Best Production Design (Narrative, Contemporary/Fantasy). But while “Thrones” has an overwhelming advantage in technical and craft categories, “Handmaid’s” appears to be much preferred by the actors branch. The Hulu dystopian drama went three for three in its acting categories: Best Drama Actress (Elisabeth Moss), Best Drama Supporting Actress (Ann Dowd), and Best Drama Guest Actress (Alexis Bledel). That’s more acting Emmys than “Thrones” has ever won. Peter Dinklage‘s two Drama Supporting Actor victories (2011, 2015) are the only acting wins to date for “Thrones.” So perhaps the support from that branch would have fueled a victory in the top race for “Handmaid’s” anyway.

We’ll never know how season one of “Handmaid’s” would have fared against season seven of “Thrones” at the Emmys, but we might get to see them go head-to-head later this season at the Golden Globes and SAG Awards, both of whose eligibility period is the 2017 calendar year. Fortunately for “Handmaid’s,” neither the Globes nor the SAG Awards like “Game of Thrones” nearly as much as the Emmys do. It has never won Best Drama Series at the Globes or Best Drama Ensemble at SAG. The show’s only Globe victory was Best TV Supporting Actor for Dinklage in 2012, and the only SAG category the show has claimed is Best TV Stunt Ensemble — though it has won that prize six years in a row (2012-2017).

What do you think would have happened if the Mother of Dragons had faced the Marthas of Gilead? And what will happen when they collide on the awards scene this fall?