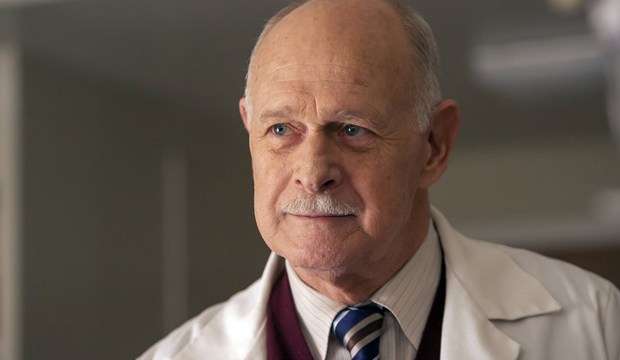 After a long career on television in acclaimed dramas like “Deadwood” and “Justified,” as well as headlining the long-running series “Simon & Simon” and “Major Dad,” Gerald McRaney has finally received overdue recognition at the 2017 Emmys. His first career nomination comes in the Drama Guest Actor category for his role on NBC’s “This Is Us,” which received a total of 11 nominations, including Best Drama Series for its debut season.

McRaney is nominated for his recurring role as Dr. Nathan Katowski, an elderly widower who delivers the children of Rebecca and Jack Pearson (Mandy Moore and Emmy nominee Milo Ventimiglia). His performance in the episode “The Big Day” has been submitted to Emmy voters. Watch our recent interview with Gerald McRaney.

In the lead-up to the birth of Rebecca and Jack’s children, Dr. K is shown struggling with the death of his wife. Even though she has been gone for over a year, he still talks to her at the dining room table, and still keeps all of her possessions in their home. Later, when his son and daughter-in-law encourage him to move on, he lashes out at them, threatening to never speak to them if they ever broach the subject again. He then brings flowers to his wife’s grave, and tearfully confesses that he’s not sure if he can, or even wants, to go on without her.

After the birth of the Pearson children, Dr. K suddenly realizes that he has to make a new start, and he gets rid of his wife’s belongings, telling her that he believes she would want him to move on. Will “The Bid Day” help McRaney win his first Emmy Award? Let’s examine the pros and cons:

McRaney gets to display a wide range of emotions in this episode. We see him struggle to function on his own, yet we understand his anger when he chastises his son for telling him to move on. In the heartbreaking scene at the cemetery, we see a man who seems to be contemplating suicide rather than go on without his wife. McRaney’s tearful breakdown is all the more impactful when you consider that he has often played the heavy throughout his career, and the deep emotion in his performance reveals a range that we often have not seen in his previous work.

Grief and loss are universal emotions, and as a result, McRaney’s performance almost demands the audience’s sympathy. Despite not being a central character in the series, Nathan becomes a character you root for, and none of that would be possible without McRaney’s beautifully modulated work.

McRaney faces competition from two other “This Is Us” actors, Denis O’Hare and Bryan Tyree Henry. With three nominees from the same show in this category, the possibility of vote-splitting could siphon away crucial votes from McRaney.

This is a category that likes to reward big performances. Despite the emotional subject matter, McRaney’s performance may be seen as too interior for Emmy voters who might prefer to reward a larger, broader performance.