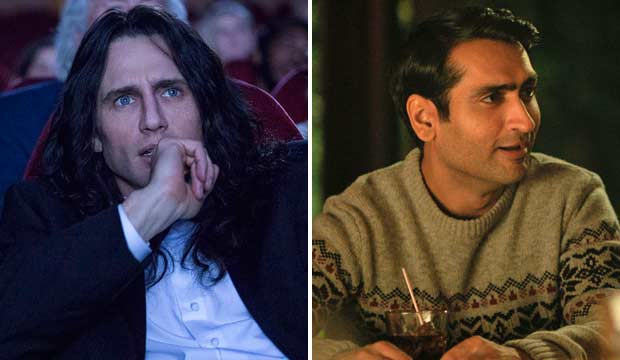 As we approach the release of the comic biopic “The Disaster Artist” on December 8, our Golden Globe Experts are jumping on the James Franco bandwagon. He has taken a big lead in the race for Best Film Comedy/Musical Actor for his performance as real-life filmmaker Tommy Wiseau, who made the 2003 film “The Room,” which has developed a cult following as one of the worst movies ever made.

As of this writing we have 15 Expert film journalists chiming in with their Golden Globe picks, and nine of them are currently backing Franco: Edward Douglas, Joyce Eng (TV Guide), Matthew Jacobs (Huffington Post), Michael Musto (NewNowNext), Tom O’Neil (Gold Derby), Kevin Polowy (Yahoo), Sasha Stone (Awards Daily), Anne Thompson (IndieWire), and Peter Travers (Rolling Stone). This would be Franco’s fourth Globe nomination and his second win. He was previously awarded for his work on the small screen: Best TV Movie/Limited Series Actor in 2002 for starring in another true Hollywood story, “James Dean.”

Also rising in our predictions is Kumail Nanjiani (“The Big Sick“), who also plays a biographical role: himself. He plays a version of himself in the true story of his courtship with his wife and co-writer Emily V. Gordon, who was placed in a medically induced coma due to illness. Currently three of our Experts think he’ll overtake Franco to win: Tariq Khan (Fox News), Keith Simanton (IMDb), and Brian Truitt (USA Today). This would be the first Globe nomination and win for Nanjiani, who is also known for his stand-up comedy and his work on the Globe-nominated HBO series “Silicon Valley.”

Franco and Nanjiani may doubly impress the Hollywood Foreign Press Association that votes for the Golden Globes because of their involvement behind the camera on their films. Franco directed “The Disaster Artist,” while Nanjiani co-wrote “The Big Sick,” so voters may take the opportunity to reward two achievements for the price of one.

Two Experts, Adnan Virk (ESPN) and Susan Wloszczyna (RogerEbert.com), say Steve Carell will win for playing tennis star Bobby Riggs in “Battle of the Sexes.” And our last Expert, Thelma Adams (Gold Derby), is forecasting a victory for Daniel Kaluuya for “Get Out.”