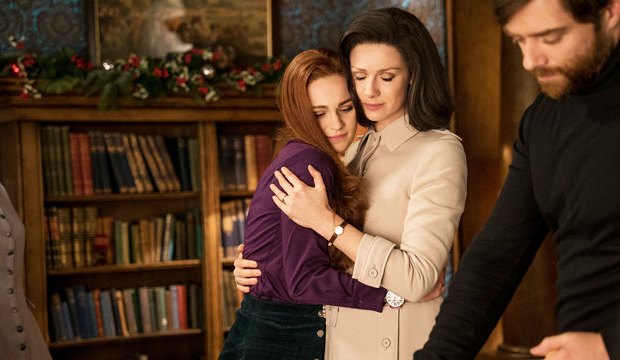 Caitriona Balfe has portrayed time-traveller Claire for three seasons on Starz’s “Outlander,” and she has earned her third consecutive Golden Globe nomination for Best TV Drama Actress for the role. The Hollywood Foreign Press Association that decides the Globes love to award new performances and shows, so if you don’t win on your first try your likelihood usually diminishes after that. Indeed, Balfe trails in our predictions with racetrack odds of 33/1. But here are the top five reasons I’m predicting Balfe is actually going to win — so she should get an acceptance speech ready.

Last year streaming services, basic cable, and the big-four networks dominated the television awards. This left premium networks HBO, Showtime, and Starz walking home empty handed. The Globes will probably make up for those slights as HBO will likely pick up hardware for “Big Little Lies,” and Showtime has a strong contender in “SMILF.” But the only chance for Starz is Balfe. The Globes have embraced Starz more than most other awards groups, but it’s been four years since Jacqueline Bisset won Best TV Supporting Actress for the network’s “Dancing on the Edge” (2014). So it may be time for the HFPA to show some love again to Starz.

When Balfe scored a nomination last year for the second season of “Outlander” it was thanks in large part to her performance in the episode “Faith” where she was a revelation as she mourned her stillborn child. But season three was even better, and Balfe’s strongest overall. Spending the first half of the season away from her beloved Jamie (Sam Heughan) allowed Balfe a chance to really deliver, whether she was saying a sweet goodbye to her 20th century husband Frank (Tobias Menzies) or dealing with her daughter Brianna (Sophie Skelton). In the second half of the season she had an epic reunion with Jamie but then was shipwrecked and alone on a deserted island, where her performance would have given Tom Hanks in “Cast Away” (2000) a run for his money. Hanks won a Golden Globe for “Castaway,” so there’s a good chance the HFPA will respond just as strongly to Balfe.

3. Elisabeth Moss is more vulnerable than we think

Elisabeth Moss is currently expected to add a Golden Globe to the Emmy she’s already won for “The Handmaid’s Tale” with odds of 2/13. Helping Moss is the fact she’s the only nominee whose show is also up for Best Drama Series. But even though Moss won her first Globe for the limited series “Top of the Lake” in 2014 she was snubbed this year for its sequel, “China Girl,” despite the fact that it was nominated for Best TV Movie/Limited Series, so maybe she’s not so indomitable after all. Also, the Globes often love to go against the grain to deliver jaw-dropping unpredictable moments, and Moss would be predictable, especially after her very recent Emmy win.

4. The other nominees don’t have the momentum

Katherine Langford (“13 Reasons Why”) ranks second in our predictions with odds of 25/1, but “13 Reasons Why” deals with teenage suicide and that might be too controversial a subject for the Globes to want to ultimately award. And either way, “13 Reasons” had its peak buzz during the spring when it premiered.

In third place is Claire Foy for her portrayal of Queen Elizabeth II on “The Crown” with odds of 28/1. “The Crown” just premiered its second season on December 8, so it’s fresh in voters’ minds. And they may want to give her a goodbye hug as this is her last season on the show before her character is aged in season three. But Foy would be only the second ever to win Best TV Drama Actress consecutively; the Globes usually don’t like reruns.

Maggie Gyllenhaal (“The Deuce”) is in last place with odds of 50/1 for her performance as a savvy prostitute in 1970s New York. Gyllenhaal is a past Globe winner for Best Movie/Limited Series Actress in 2015 for “The Honorable Woman,” but “The Deuce” was surprisingly snubbed for Best Drama Series, and her co-star James Franco was also missing in action for Best TV Drama Actor even though he played twins and was popular enough with the HFPA to be nominated for Best Film Comedy/Musical Actor for “The Disaster Artist.” So the under-performance of her show overall probably limits her chances of upsetting.

5. She could follow Jane Seymour’s path to victory for “Dr. Quinn, Medicine Woman”

Balfe should be encouraged by Jane Seymour, who needed three tries in order to finally win for “Dr. Quinn, Medicine Woman” in 1996. Seymour lost her first nomination in 1994 to first-time nominee Kathy Baker (“Picket Fences”). On her second try in 1995 Seymour was bested by 16-year-old Claire Danes for her angst-ridden performance in “My So-Called Life.” But in 1996 Seymour was victorious even though she was joined by two newcomers — Gillian Anderson (“The X-Files”) and Sherry Stringfield (“ER”) — as well as the returning Baker and third-time nominee Heather Locklear (“Melrose Place”). So if the HFPA likes you enough to keep nominating you, then Balfe should not be shocked to hear her name called as the winner on January 7.