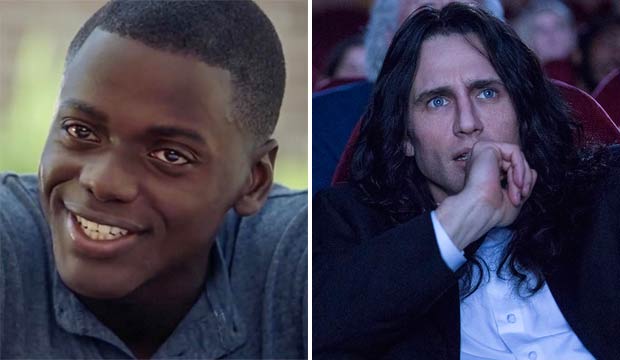 James Franco (“The Disaster Artist”) has been the Golden Globes frontrunner for Best Film Comedy/Musical Actor since before the nominations were announced on Monday morning, December 11. He’s still the frontrunner after the announcement of the nominations, but he’s not a lock. There’s a chance Daniel Kaluuya (“Get Out”) will upset, according to our Experts and Editors.

But would it really be an upset? On paper, Franco and Kaluuya appear to be on equal footing. “The Disaster Artist” and “Get Out” have the same two Globe nominations — in this category as well as Best Film Comedy/Musical. And if Globe voters want to be seen to predict the Oscars, both Franco and Kaluuya were nominated at the SAG Awards, which are typically a strong predictor of the Oscars. If anything, Kaluuya may really be the stronger contender since “Get Out” has better odds in the Oscar race for Best Picture, and it received a second SAG nomination for its ensemble cast.

Then again, Franco gives a showier performance playing a real, recognizable person, transforming himself and his mannerisms to play eccentric director Tommy Wiseau. Franco also has a higher profile at the Globes. While Kaluuya is nominated for the first time in his career, Franco contends for the fourth time, and he previously won for playing another real-life entertainer: Best Movie/Limited Series Actor in 2002 as the title character in “James Dean.” And Franco could get extra credit from Globe voters since he’s also the director of “The Disaster Artist.”