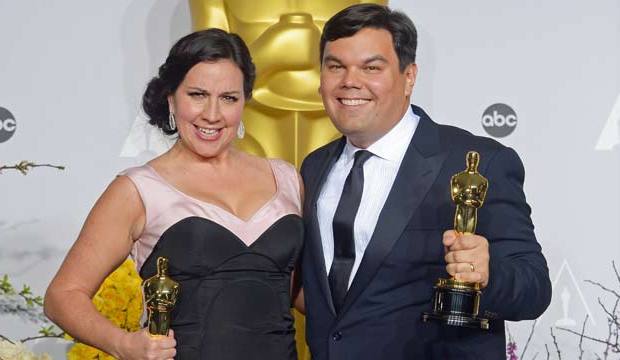 Robert Lopez and his wife Kristen Anderson-Lopez won an Oscar, a Grammy, and a Critics’ Choice Award for their song “Let It Go” from the animated movie “Frozen” (2013). For Anderson-Lopez these were her first major showbiz awards. But her husband’s Oscar win made him the youngest member of the exclusive EGOT club of celebrities who have won the grand slam of Emmy, Grammy, Oscar, and Tony Awards. Now the songwriting couple is back this year with “Remember Me” from another animated film, “Coco,” which gives the duo a second chance at one of the few awards that alluded them for “Frozen” — the Golden Globe.

In 2013 they were nominated against songs from a who’s who of popular music: “Ordinary Love” from “Mandela: Long Walk to Freedom” by U2; “Please Mr. Kennedy” from “Inside Llewyn Davis” by Ed Rush, George Cromarty, T Bone Burnett, Justin Timberlake, Joel Coen, and Ethan Coen; “Atlas” from “The Hunger Games: Catching Fire” by Coldplay; and “Sweeter than Fiction” from “One Chance” written by Jack Antonoff and Taylor Swift.

U2 ended up winning that award. Nelson Mandela had recently passed away, which possibly helped swing the vote. But it may also have been the Hollywood Foreign Press Association’s preference for A-list celebrities that made them want to see U2 on stage. However, now the HFPA seems like one of the only awards group that hasn’t awarded the Lopezes, so they might want to take this opportunity to make it up to the songwriting duo. And the Globes might also want to award the presumed Oscar frontrunner, as these awards also pride themselves as an Oscar crystal ball.

As it stands the Lopezes are expected to win at the Globes with odds of 4/9 according to our latest predictions, which are based on the combined forecasts of more than 1,700 Gold Derby users. But this category is filled with potential upsets. Right on their heels are Benj Pasek and Justin Paul for “This is Me” from “The Greatest Showman” with odds of 9/2.  Pasek and Paul were last year’s winners in this category for “City of Stars” from “La La Land.” But back-to-back wins are rare; it has been 24 years since Alan Menken won this category consecutively for the title song from “Beauty and the Beast” (1991) and “A Whole New World” from “Aladdin” (1992). So maybe Pasek and Paul will have to wait a couple of years before adding another Globe to their awards shelf.

Then there is R&B singer-songwriter Mary J. Blige, a past nominee for “The Living Proof” from “The Help” (2011). This time around Blige is a double nominee: Best Song for “Mighty River” from “Mudbound” (shared with co-writers Raphael Saadiq and Taura Stinson) and Best Film Supporting Actress for her performance in that film Blige’s odds have her in third place at 17/2. But being a double-nominated superstar could prove to be too tempting for the HFPA to pass up, especially since they do love to award music superstars. In addition to U2, recent winners have included Madonna for “Masterpiece” (shared with Julie Frost and Jimmy Harry) from “W.E.,” Adele for the title song from 2012’s “Skyfall” (shared with Paul Epworth), Common and John Legend for “Glory” from “Selma” (2014), and Sam Smith for “Writing’s on the Wall” (shared with Jimmy Napes) from “Spectre” (2015).

The last two nominees in this category are music stars as well. In a distant fourth is “Home” by Nick Jonas with Nick Monson and Justin Tranter from another animated film, “Ferdinand,” with odds of 66/1. And in fifth place is the title song from “The Star” by Mariah Carey and Marc Shaiman with odds of 80/1. While Carey herself is a first-time nominee she did perform a previously nominated song, “When You Believe” from “The Prince of Egypt” (1998) with Whitney Houston.

But even if the Globes again decide to honor a glamorous celeb in this race, that does not mean the Lopezes’ Oscar prospects are diminished, as they learned with “Let it Go.” But should they win it could cement their place as the Oscar frontrunners as it did for Pasek and Paul last year for “City of Stars.”