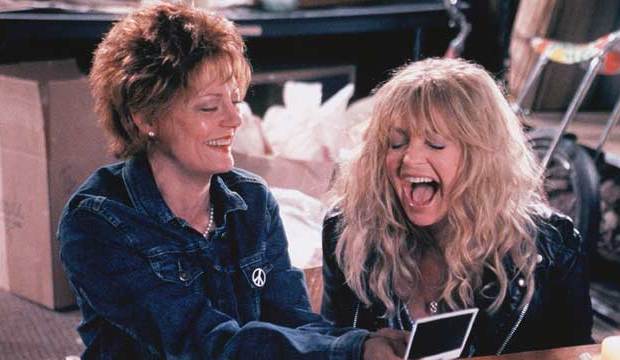 Some thought that it might never happen, but Goldie Hawn is back in front of the cameras. For the first time in 15 years, she has returned to the nation’s theaters in 2017, this time starring with Amy Schumer in the mother/daughter comedy “Snatched.” She plays Linda Middleton, the tightly-wound over-protective mother of Schumer’s Emily, who asks her mom to join her on a vacation trip to Ecuador. Even though she’s on holiday, Linda is a bundle of nerves, as it turns out, with good reason. The movie surprised many industry experts by topping its first weekend over Guy Ritchie‘s “King Arthur” at the box office.

Hawn hadn’t made a movie since 2002’s “The Banger Sisters,” and her presence on the film scene has been missed. One of the most successful comic actresses for decades, Hawn has been a staple on the awards scene, winning an Oscar and a Golden Globe for her first major film role, as a needy lover in the 1969 comedy “Cactus Flower.” In total, Hawn has earned a pair of Oscar nominations (“Cactus Flower” and “Private Benjamin”) and a total of eight Golden Globe nods (“Cactus Flower,” “Butterflies Are Free,” “Shampoo,” “The Duchess and the Dirtwater Fox,” “Foul Play,” “Private Benjamin,” “Best Friends” and “The Banger Sisters”).

Hawn first became well-known to audiences worldwide with her skimpy outfits and outrageous giggles on the Emmy-winning 1960s variety show “Rowan and Martin’s Laugh-In.” One reason for her extended film break was to enjoy her children, with Oscar-nominated actress Kate Hudson (“Almost Famous”) and Oliver Hudson (“Rules of Engagement”), and grandchildren. Her steady beau, Kurt Russell, has remained very active in the industry with recent films including “The Hateful Eight” and “Guardians of the Galaxy, Volume 2.”

Can “Snatched” bring Goldie Hawn back to the Globes with her ninth comedy nomination? Join the debate with industry insiders in our Gold Derby film forums!

Also, be sure to make your Emmy predictions. Weigh in now with your picks so that Hollywood insiders can see how their TV shows and performers are faring in our Emmy odds. You can keep changing your predictions until just before nominees are announced on July 13. Join in the fierce debate over the 2017 Emmys taking place right now with Hollywood insiders in our TV forums. And visit our home page for the latest in entertainment news.

Related: Watch our many interviews with 2017 Emmy contenders

Golden Globes 2021 film predictions slugfest: In which we try to download those 'Music'…

2018 DGA Awards presenters are a mix of A-list celebs and past winners: Amy Schumer, Damien Chazelle ...