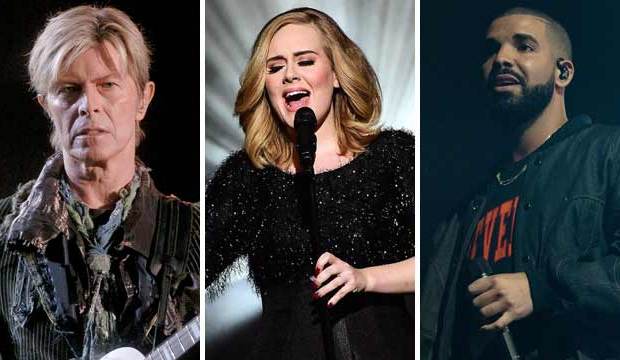 David Bowie was among the biggest winners at the 2017 Grammy Premiere Ceremony, during which awards were handed out in approximately 70 categories. Bowie posthumously claimed Best Alternative Album and Best Engineered Album (“Blackstar”) as well as Best Rock Performance for the title track. “Blackstar” also won Best Recording Package, but that award didn’t go to Bowie himself. Before this, Bowie had only ever won one Grammy: Best Music Video for “Jazzin’ for Blue Jean” (1985). See the complete list of winners here.

Adele‘s night also got off to a good start. She won both of her categories presented at the Premiere Ceremony: Best Pop Solo Performance (“Hello”) and Best Pop Vocal Album (“25”). To date she has won 12 Grammys, and she still has not lost a single category since 2010. At the main telecast she will compete for Album of the Year (“25”) and Record and Song of the Year (“Hello”).

Drake also won two awards: Best Rap/Sung Performance and Best Rap Song, both for his hit “Hotline Bling.” He was also up for Best Rap Performance (“Pop Style”), but that went to Chance the Rapper, Lil Wayne and 2 Chainz for “No Problem.”

Beyonce won her first category, Best Music Video (“Formation”), but that was the only prize she received during the pre-show. “Freedom,” her collaboration with Kendrick Lamar, was upset by Drake for Rap/Sung Performance, she lost Rock Performance (“Don’t Hurt Yourself” with Jack White), as expected, to Bowie, and her “Lemonade” lost the award for Best Music Film to “The Beatles: Eight Days a Week The Touring Years,” directed by first-time Grammy champ Ron Howard. Since Howard is also an Emmy and Oscar winner he is now just a Tony away from EGOT — “A Beautiful Mind: The Musical” perhaps?

In country categories, Album of the Year contender Sturgill Simpson (“A Sailor’s Guide to Earth”) claimed Best Country Album, while Lori McKenna was awarded Best Country Song for penning Tim McGraw‘s “Humble and Kind.” Pentatonix and Dolly Parton won Best Country Duo/Group for “Jolene.” It’s the first collaboration to win this award since collaborations were folded into the category in 2012. It’s the second career victory for Pentatonix and the eighth for the legendary Parton, who hadn’t won a Grammy for 15 years before this.

The R&B field was full of upsets. Best R&B Performance was awarded to Beyonce’s little sister Solange (“Cranes in the Sky”) over Rihanna (“Needed Me”), so Grammys clearly run in the Knowles family. Rihanna was also expected to win Best R&B Song for “Kiss it Better,” but that went to Maxwell‘s “Lake by the Ocean.” And Best R&B Album went to Lalah Hathaway for “Lalah Hathaway Live” instead of our projected favorite BJ the Chicago Kid (“In My Mind”).

Veteran comedian Carol Burnett won the first Grammy of her career: Best Spoken Word Album for “In Such Good Company.” And Patton Oswalt won Best Comedy Album for “Talking for Clapping” — his first victory on his fourth nomination — just a few months after claiming the Emmy for writing the televised special.

“The Color Purple” won the Grammy for Best Musical Theater Album; its stars Cynthia Erivo, Jennifer Hudson and Danielle Brooks were awarded as principal vocalists. But the recording academy threw us for a loop in the race for Best Visual Media Compilation, which went to “Miles Ahead,” which features music from Don Cheadle‘s film about Miles Davis. Cheadle won as a producer of the album.

Best Visual Media Score went to John Williams for “Star Wars: The Force Awakens,” adding to his haul as one of the most awarded musicians in Grammy history (this is number-23 for the legendary composer). And Best Visual Media Song was awarded to Justin Timberlake‘s “Can’t Stop the Feeling” from the animated film “Trolls,” which is also nominated for an Oscar. This was Timberlake’s 10th Grammy victory.