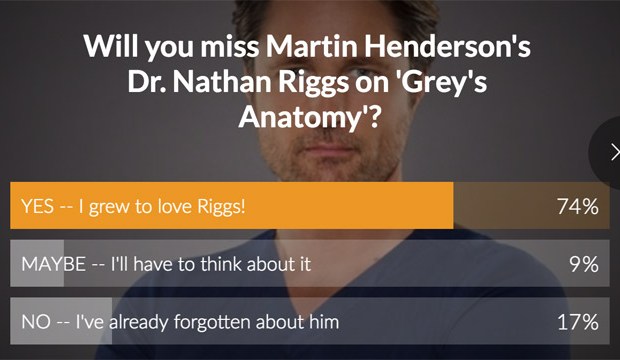 “Grey’s Anatomy” fans are still in a state of shock after losing Martin Henderson‘s Nathan Riggs in last week’s emotional episode. In fact, in our recent poll that asked whether you’ll miss Riggs on the show, a whopping 74% voted that they grew to love the character over the past few years. In comparison, 9% said they’ll have to think about it more, while 17% of haters said they’ve already forgotten about Riggs.

Henderson played the New Zealand-born cardiothoracic surgeon who joined up with ABC’s long-running medical drama two years ago as a former buddy of Kevin McKidd‘s Owen Hunt. Before long, Riggs became a love interest for Meredith Grey (Ellen Pompeo) and was the first person she truly cared for following her husband Derek Shepherd’s (Patrick Dempsey) death.

Last week’s episode, titled “Danger Zone,” ended with a shocker as Riggs decided to leave Grey Sloan Memorial Hospital to start a new chapter in Malibu with the former love of his life and Owen’s sister, Megan Hunt (Abigail Spencer). Not wanting to get involved in another love triangle, Meredith took the high road and told Riggs to be with Megan since he truly loved her.