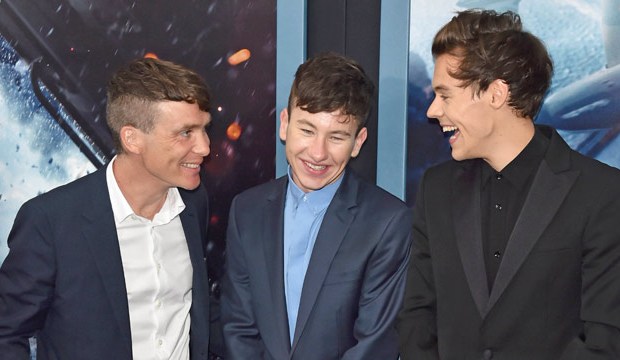 Harry Styles was caught laughing with members of the “Dunkirk” cast — including Cillian Murphy and Barry Keoghan (above) — at Tuesday’s movie premiere in New York. Styles was the biggest name on the carpet that also included legendary thespians like five-time Oscar nominee Kenneth Branagh and recent winner Mark Rylance (“Bridge of Spies,” 2015). Click through our gallery above that highlights all of the Harry Styles 2017 photos from the “Dunkirk” premiere.

In Christopher Nolan‘s war epic “Dunkirk,” Styles plays Alex, a British Army private. He reportedly earned the role after auditioning against hundreds of candidates, and not because he’s a world-renowned pop star. In fact, Nolan has even said that he wasn’t aware of Styles’ fame before casting him in the pivotal role. In other words, Styles’ appearance in “Dunkirk” is exactly the opposite of Ed Sheeran‘s stunty role on “Game of Thrones.”

The awards discussion is already beginning for “Dunkirk,” but might its summer release date hurt its chances at the upcoming 2018 Oscars? The film opens in the U.S. on Friday, July 21. We’re not too worried about its early release, since several other notable films — including Nolan’s own “The Dark Knight” (2009) and “Inception” (2010) — both earned Oscar glory after debuting in the summer months.

Are you planning on going to the theater to watch “Dunkirk”? And do you think it’s going to be a contender at the 2018 Oscars? Sound off in the comments section below and then join the discussion on this and more with your fellow movie fans in our forums.

DISCUSS‘Dunkirk’ with Hollywood insiders in our notorious forums