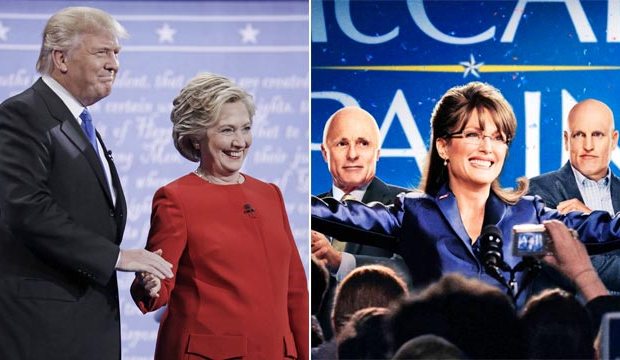 Donald Trump may finally be responsible for winning an Emmy, but not in the way he hoped. HBO announced Thursday that they will soon chronicle Trump’s inexplicable defeat of Hillary Clinton during the 2016 presidential election with the help from “Game Change” producers Tom Hanks and Gary Goetzman, and director/producer Jay Roach. The new limited series, which is sure to be like Emmy catnip, will be based on the upcoming third book in the political series by co-authors Mark Halperin and John Heilemann.

The original “Game Change” telefilm that took on Sarah Palin‘s rise and fall won five Emmy Awards for HBO in 2013: Best TV Movie, Best Actress for Julianne Moore as Palin, Best Directing for Roach, Best Writing for Danny Strong and Best Casting. The book it was based on is considered the definitive account of the historic 2008 election between Barack Obama and John McCain, and was followed four years later by the anticipated sequel “Double Down: Game Change 2012.” Something tell us the upcoming Trump/Clinton book, published by Penguin Press, will be the biggest seller yet.

HBO Films president Len Amato said in a statement: “We are thrilled to continue our relationship with Mark Halperin and John Heilemann, whose work on their bestselling book ‘Game Change’ set the bar for political reporting and storytelling inside a presidential campaign. Reuniting ‘Game Change’ director and executive producer Jay Roach and Playtone producers Tom Hanks and Gary Goetzman with Mark and John for a project based on their upcoming book promises to vividly capture the most unique and impactful event in modern American politics.”

Dish the Emmys with other fans in our notorious forums

No details are yet known about who will play Trump and Clinton, or when the limited series will debut. However, HBO will face unusual competition on the TV landscape as Ryan Murphy‘s next cycle of “American Horror Story” on FX will also tackle the same subject. It’ll be interesting to see which project is able to depict Trump more accurately: HBO’s historical narrative or FX’s frightening farce.

The Oscars love the '90s: The supporting actor field is a bunch of acting champs (and a nominee) from…

2020 Golden Globes category order: When is each winner announced and who are the 49 presenters?

Who is presenting at Sunday's Golden Globes? Complete list of 49 presenters announced

Who are the 21 Golden Globe presenters announced so far for Sunday's 2020 ceremony?