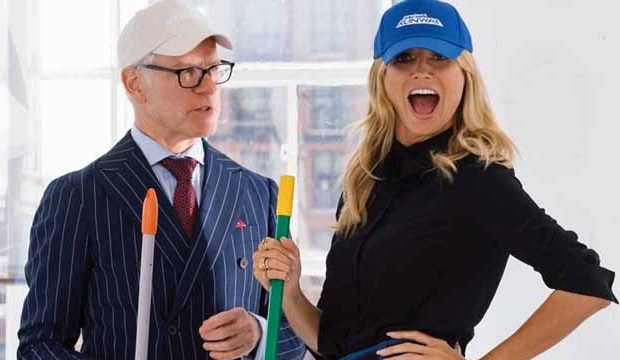 Gold Derby can exclusively reveal that Heidi Klum and Tim Gunn are entering the “Project Runway” episode “Unconventional Launch Party” as their Emmy submission for Best Reality Host. This installment of the Lifetime show aired September 15 and was the first episode of season 15. The series itself is also entering the same episode in its battle for Best Reality-Competition Program.

In a description by our contributing writer John Benutty: “The season premiere takes one of its most iconic twists, the unconventional materials challenge, and surprises the designers by making it the first challenge of the season. Greeting them at a welcome to the show party, series hosts Klum and Gunn present the task of creating a cocktail dress using the party decorations surrounding them and in between sips of champagne and toasts to the new season, cheer the designers on as they destroy the room. As always, Gunn works with the designers throughout the episode as they create their garments, while Klum returns later in the hour to preside over the panel of judges as they decide the best and the worst creations from fashion’s most promising up and coming designers.”

Klum and Gunn won their hosting category in 2013 and have been nominated every year since. For 2017 they are up against Alec Baldwin (“Match Game”), W. Kamau Bell (“United Shades of America”), last year’s winner RuPaul Charles (“RuPaul’s Drag Race”), Gordon Ramsay (“MasterChef Junior”), and Martha Stewart and Snoop Dogg (“Martha and Snoop’s Potluck Dinner Party”).

The show has been nominated 13 consecutive years as Best Reality-Competition Program but has never won this top category. For the latest race, the series faces off against “The Amazing Race,” “American Ninja Warrior,” “RuPaul’s Drag Race,” “Top Chef,” and two-time defending champ “The Voice.”