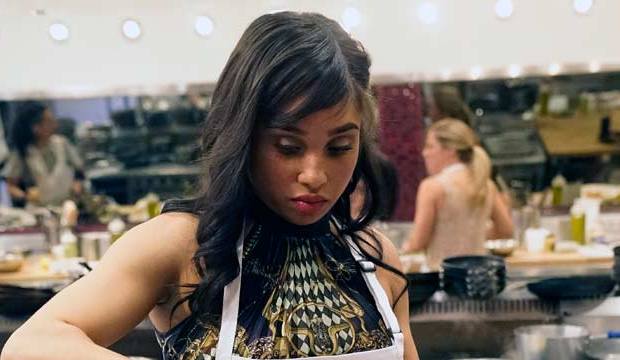 Things are certainly starting to heat up on “Hell’s Kitchen All Stars.” Fans of Fox’s reality TV cooking competition series are anxiously awaiting the next round of eliminations on Friday night. Chef Gordon Ramsay has already whittled the number of contestants down from 16 to 13, and he’s not done cutting. We asked you in a recent poll who should be kicked off next, and the resounding favorite with 54% of the vote was struggling cook Elise Harris.

Interestingly enough, Elise won our very first poll asking who should get the boot with 54% of the vote. It looks as though her odds haven’t improved much, if at all.

Coming in second place with 16% of the vote was Robyn Almodovar, who Ramsay sent to the Red Team in a shocking last minute swap with Blue Team contestant Josh Trovato. She faired better than Josh, who got eliminated after dinner service when he failed to capitalize on the second chance given him. Can Robyn hang on for another week?

SEE‘Hell’s Kitchen’ winners in order: Who’s your favorite and where are they now? [POLL]

In third place with 8% of the vote was Manda Palomino, followed by Barbie Marshall with 7% and Benjamin Knack with 4%. Jared Bobkin, Michelle Tribble, and Milly Medley all tied for 6th place with just 3% of the vote.

Tying for 7th place with a mere 1% were Dana Cohen and Van Hurd. And coming in last place (or in this case, first?) with 0% of the vote were Giovanni Filippone, Jennifer Normant, and Nick Peters Bond. It looks as though fan’s loyalties are split more than ever.

Who will hang up their apron for the last time? Tune into Fox on Friday at 8:00 p.m. to see who can survive “Hell’s Kitchen” in Season 17, Episode 6.