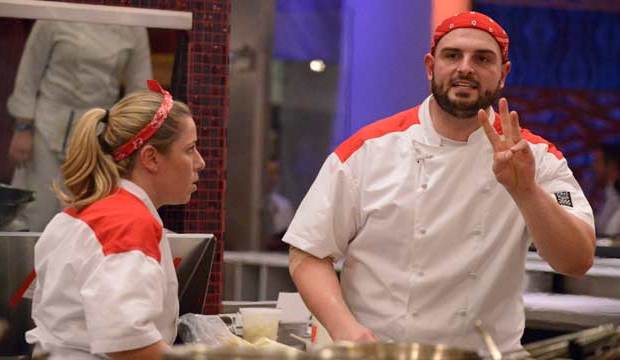 Fans of Fox’s “Hell’s Kitchen All Stars” who were wondering whether or not Chef Gordon Ramsay made the right call in swapping Josh Trovato for the Red Team and Robyn Almodovar for the Blue Team got their answer on episode 5. Josh managed to squander his second chance (or rather, his third), getting kicked out of the kitchen during dinner service. Make your “Hell’s Kitchen: All Stars” predictions for a chance to top our famous leaderboards. It’s fun and easy, so start predicting right now.

For the first challenge, Ramsay gathers his chefs outside to a mini farm of cows, pigs, lambs and goats. He encourages them to think outside the pin, tasking them to cook a fish dish with fresh vegetables over a fire pit. Right off the bat, Josh is having a hard time, as he drops a block of wood over the open flame, smothering it. Ramsay brings in Harrison Ford‘s son, Chef Ben Ford, to help judge the dishes, and the winner is once again the Blue Team.

To celebrate, the winners are taken horseback riding, while the losers have “a crappy day” (if you’re guessing they have to spend the day shoveling manure, you’re right on the money). Manda Palomino asks Josh for help lifting a big bucket of poop, and he chastises her for doing a bad job. He begins to wonder if he can make it on the Red Team, rueing that there isn’t a Green Team for him to join. Perhaps it’s time for Josh to take a look in the mirror and wonder if he’s the problem, not his teammates.

Next comes the dinner service, with celebrity guest Shaun Brown (“True Blood”) looking forward to a plate of smoked salmon rillette. Robyn is struggling to find her way on the Blue Team, dropping a tray of chicken onto the floor. Elise Harris is also slowing things down on her team, staring off into space until the next ticket is called. Yet things go from bad to worse for Josh, who’s babbling about a lobster that doesn’t exist while the beef wellington grows cold without a garnish. Ramsay kicks him out of the kitchen.

Yet Josh won’t go quietly. He returns to the kitchen hoping to get back on the line, but Ramsay isn’t having it. He sends Josh home before eliminations, forcing him to do the walk of shame out of the restaurant. With the bad apple gone, both teams are able to flourish and tie for victory.