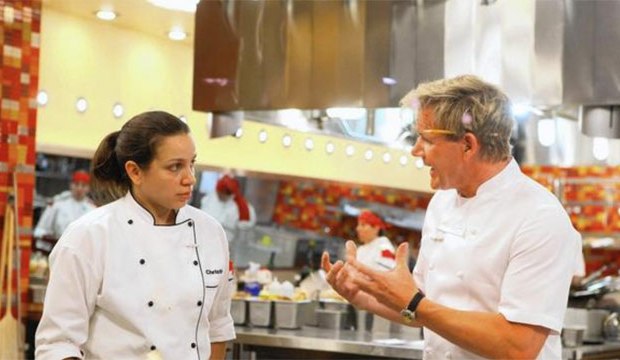 In the pantheon of “Hell’s Kitchen” winners, one stands alone as the definitive fan favorite: Season 10’s Christina Wilson. In our recent poll asking fans to name their top choice, this Philadelphia, Pennsylvania native earned 18% of the vote. We then had a tie for second place with Dave Levey (Season 6) and Kimberly-Ann “Ryan” Ryan (Season 16) both coming in with 17% support. Do you agree with these “Hell’s Kitchen” poll results? Be sure to sound off down in the comments section.

For a refresher of all the former champions, click through our photo gallery down below. Here is what renowned reality TV host Gordon Ramsay had to say about all three of these “Hell’s Kitchen” winners when they won their respective seasons:

Chef Ramsay on Christina: “Christina’s passion and talent are undeniable. She’s a strong leader who is totally at home in the kitchen. I know I’m not rolling the dice with her in Vegas because she is the real deal.”

Chef Ramsay on Dave: “Dave has a very natural ability and a very sophisticated palate. He fought through excruciating pain and excelled and went on to win ‘Hell’s Kitchen.’ He’s gonna be an amazing asset to the Araxi Grill and Bar in Whistler and I’d like to wish him the best of luck, but honestly, I don’t think he’ll need it.”

Chef Ramsay on Ryan: “Early on, I challenged Ryan to find her voice. Once she proved to me she could command a kitchen, there was no stopping her. She has the tenacity, drive and skill that will make her a great head chef at Yardbird Southern Table and Bar at the Venetian Las Vegas.”

Rounding out the results of our “Hell’s Kitchen” winners poll, Michael Wray (Season 1) and La Tasha Mccutchen (Season 13) both came in with 8% of the vote, Rahman ‘Rock’ Harper (Season 3) and Meghan Gill (Season 14) earned 6% apiece, Holli Ugalde (Season 7) scored 5%, while Ja’Nel Witt (Season 11) and Scott Commings (Season 12) both nabbed 3%. Everyone else came in with 2% or lower.

Who will win the current 17th cycle, also known as “Hells Kitchen All Stars”? According to exclusive Gold Derby polling, the predicted winner of Season 17 will be Barbie Marshall. She has leading 11/8 odds to prevail, putting her just ahead of Dana Cohen at 5/2 odds and Milly Medley with odds of 9/2.