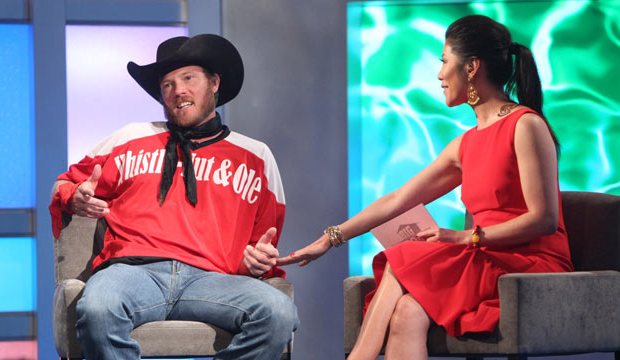 “Julie, there’s a bunch of counterfeits in there and this was absolutely, 100 percent not expected. I am blindsided!” a stunned Jason Dent expressed to “Big Brother” host Julie Chen following his live eviction Thursday night. “I’m glad I made it as far as I did. I never expected to come this far.” The agitated rodeo clown then threatened, “I would like to go back in there for just five minutes.”

If goodbye messages from his former housemates were meant to make Jason feel better, it had the opposite effect. Upon learning from Josh Martinez that Paul had orchestrated his eviction, Jason was fuming. “Paul is now obsolete. That was a blatant turn on friendship. Now he can take his bracelets and pitch them.”

Jason was the first of two houseguests to be evicted and sent to the jury during a special double eviction episode of CBS’s reality TV show. The second was Raven Walton. Jason will be greeted by Cody Nickson, Mark Jansen, Elena Davies and Matt Clines in the “Big Brother” jury house. His former alliance of Alex and Paul remain in the house to duke it out with Josh, Christmas Abbott and Kevin Schlehuber.

'Big Brother 24' spoilers: Monte and Taylor wonder if the jury will learn about their showmance