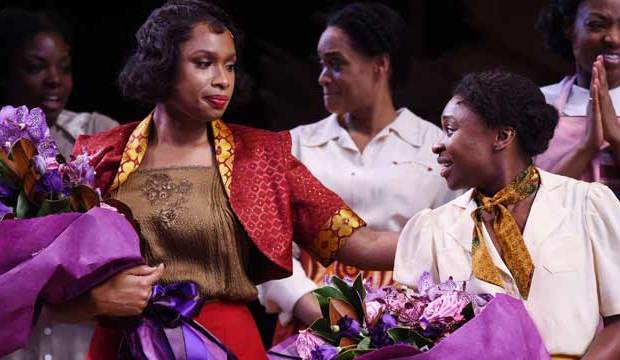 The recent revival of “The Color Purple” was a hit at the 2016 Tony Awards, winning Best Musical Revival and Best Actress in a Musical (Cynthia Erivo), but co-star Jennifer Hudson wasn’t even nominated for her featured performance as Shug Avery. That role had previously earned an Oscar nomination for Margaret Avery in 1986 for the film version and a Tony nomination for Elisabeth Withers-Mendes in 2006 for the original Broadway production. Hudson was notoriously unhappy about her omission, but she’ll have a chance for redemption at the Grammys, where she and her co-stars are nominated for Best Musical Theater Album.

Hudson is nominated alongside Tony winner Erivo and Tony nominee Danielle Brooks as principal soloists on the album. It will be the second chance for “The Color Purple” in the category; the first Broadway cast recording earned a nomination in 2007, losing to “Jersey Boys.” If it wins it will be the second Grammy victory for Hudson, who won Best R&B Album in 2009 for her self-titled debut.

But Hudson isn’t the only Grammy favorite in the running. So is Cyndi Lauper, who contends as a producer for the West End cast recording of “Kinky Boots” along with principal soloists Killian Donnelly and Matt Henry. Lauper previously won Best New Artist in 1985, but she didn’t win another award until almost 30 years later: in 2014 when she won this category for the Broadway recording of “Kinky Boots.” Can a new recording of the musical win again so soon?

Ironically, comedian and actor Steve Martin has more Grammys than Hudson and Lauper combined. He has won five times, twice for comedy and three more times in country, bluegrass and Americana categories. This year he’s nominated for “Bright Star” with co-composer Edie Brickell and principal soloist Carmen Cusack. Martin and Brickell were nominated at the 2016 Tonys for their score, and Cusack was nominated for her lead performance.

Meanwhile, popular singer-songwriter Sara Bareilles has yet to win a Grammy in any category despite six nominations, including Song of the Year for her breakout hit “Love Song” (2009) and Album of the Year for “The Blessed Unrest” (2014). She’s nominated as producer and composer of the musical “Waitress” along with the star of that production, Jessie Mueller, who won this award in 2015 for the recording of “Beautiful: The Carole King Musical.”

Photo Gallery: The Biggest Grammy Winners of All Time

Rounding out the category is “Fiddler on the Roof” featuring principal soloist Danny Burstein, who earned a Tony nomination. He was previously nominated in this Grammy category in 2013 as a vocalist on “Follies.” But despite numerous revivals, “Fiddler” was only nominated in this race once before, in 1965 (losing to “Funny Girl”).

With the exception of the British production of “Kinky Boots,” all of these shows competed at the 2016 Tonys, but “The Color Purple” was the only show that was able to win anything after “Hamilton” dominated the field with 11 victories. The good news for this field of nominees, though, is that the “Hamilton” cast recording was released on September 25, 2015, so it won its Grammy for Best Musical Theater Album last year, opening the door to one of its unlucky Tony rivals to get some long-awaited kudos of their own.