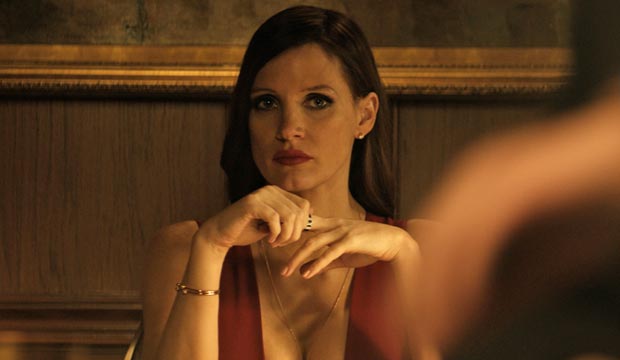 Jessica Chastain is right on the bubble for a Best Actress Oscar nomination for “Molly’s Game” according to the Expert film journalists we’ve polled. It would be the third bid for Chastain, who was previously up for Best Supporting Actress for “The Help” (2011) and Best Actress for “Zero Dark Thirty” (2012). And in this case history is on her side. The last four movies written by Aaron Sorkin have all earned Oscar nominations for acting.

Sorkin penned “Charlie Wilson’s War” (2007), for which Philip Seymour Hoffman was nominated. Then Jesse Eisenberg was nominated for “The Social Network” (2010). Both Brad Pitt and Jonah Hill contended for “Moneyball” (2011). And Michael Fassbender and Kate Winslet picked up noms for “Steve Jobs” (2015). For that matter if you count his track record on TV his streak is even longer.”The West Wing,” “Studio 60 on the Sunset Strip,” and “The Newsroom” all won acting Emmys. Even his underappreciated “Sports Night” earned an acting bid for guest star William H. Macy. The last Sorkin project not to receive any acting love from its top peer group was the film “The American President” in 1995 — more than two decades ago.

Considered that way, things are looking good for Chastain as the title character of Molly Bloom, who ran a high-stakes poker game and became the focus of an FBI investigation. These are true events; Bloom’s book was the basis for the film, and we know how much the academy loves actors playing biographical roles, even if they aren’t in Sorkin projects — though that usually doesn’t hurt. “Molly’s Game” is also Sorkin’s directorial debut, so perhaps the academy will be doubly supportive of him and his cast.