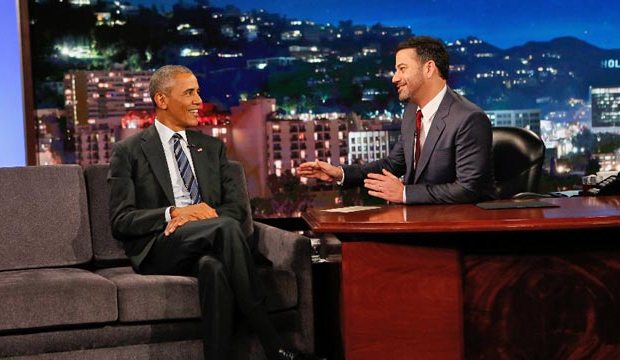 Gold Derby can exclusively reveal that “Jimmy Kimmel Live” is entering the episode featuring guests Barack Obama and Will Ferrell as its Emmy submission for Best Variety Talk Series. This installment is the October 24 episode of the 14th season for the ABC show. In this segment, the former President read a series of “Mean Tweets” that culminated with a mic-drop of a moment when he read a final tweet by Donald Trump. “President Obama will go down as perhaps the worst president in the history of the United States,” Trump had previously tweeted. And Obama coyly responded, “Well, @realDonaldTrump, at least I will go down as a president.” Comic actor Ferrell impersonated the late Chicago Cubs baseball announcer Harry Caray.

Entering a regular episode is a unique strategy for the veteran talk show host since he typically submits his live post-Oscars special for this category. That was not a possibility this year, however, since Jimmy Kimmel was hosting the actual Academy Awards ceremony and wasn’t able to offer his live special. Anthony Anderson took over that slot for ABC on that evening.

SEE[WATCH] President Obama responds to Donald Trump tweet on ‘Jimmy Kimmel Live’: ‘At least I will go down as a president’