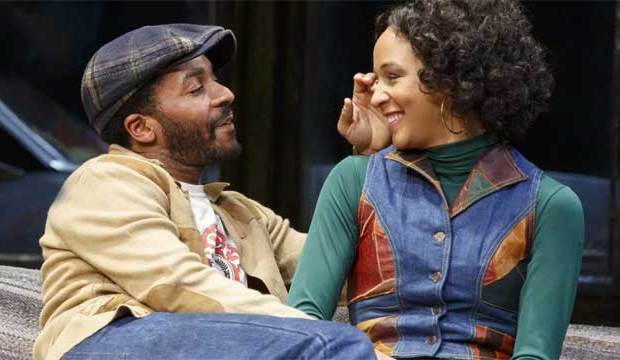 This past Sunday, March 12, the Manhattan Theatre Club production of “Jitney” concluded its limited run. The play, the first written in August Wilson’s famed Century Cycle of 10 plays, had never before been seen on Broadway prior to this mounting. Helmed by Tony Award-winning actor Ruben Santiago-Hudson (“Seven Guitars”), the ensemble drama boasted stage and screen talent including John Douglas Thompson, Michael Potts, André Holland, and Brandon J. Dirden, amongst others.

Set in 1977 in the Hill District of Pittsburgh, Pennsylvania, “Jitney” centers on Becker (Thompson), the owner of an unlicensed taxi cab company, at a moment of personal and professional upheaval: not only has his son Booster (Dirden) finally been released from prison after serving a decades-long sentence for murder, but the city also informs him that the entire block where his jitney company operates will be demolished. The play also portrays life in 1970s Pittsburgh through the interactions between the many jitney drivers employed by Becker.

“Jitney” received near-universal rave reviews from critics when it opened in January. Ben Brantley (New York Times) praises the “glorious new production” for its “impeccably tuned ensemble” and “pulsing, defiant aliveness of every character onstage,” lauding Thompson, who he deems “one of this country’s greatest classical actors.” Marilyn Stasio (Variety) similarly applauds the “pitch-perfect revival,” from the “meticulously designed set” by David Gallo and the “artfully dreary lighting scheme” by Jane Cox, and the performance of André Holland, who brings an “appealing dose of boyish charm” to the character of Youngblood, a Vietnam vet trying to make a better life for himself and his family one fare at a time.

These glowing reviews from critics bode very well for the production leading up to the Tony Awards. While a whopping nine shows will be eligible in the Best Play Revival category, “Jitney” seems to be a lock for a nomination, especially considering the banner year Wilson’s works have been having, such as the Academy Award-winning film adaptation of fellow Century Cycle play “Fences,” helmed by Denzel Washington, for which Wilson received a posthumous Best Adapted Screenplay nomination. Like Washington, Santiago-Hudson has become one of the theater community’s most trusted interpreters of Wilson’s works, and his vision for this production of “Jitney” seems guaranteed for a nomination for Best Direction.

Of the nine member ensemble, Thompson seems most likely to earn an acting bid, regardless of whether the Tony Nominating Committee deems he will contend as a Lead or Featured Actor. Holland looks competitive for a nomination, too, not only because of his performance in “Jitney,” but also because of his attention-grabbing work on TV in “American Horror Story: Roanoke” and in the Oscar Best Picture-winner “Moonlight.” Potts (“True Detective”) could also surprise with a well-earned bid for his scene-stealing work as Turnbo.

One factor that seems to be working against “Jitney” is its early closing date, with the production shuttering just prior to the the flurry of spring openings and onslaught of Tony season campaigns. This very issue didn’t stymie last year’s victor for Best Revival, “A View from the Bridge,” though. That production reaped five Tony nominations, including Actor in a Play for Mark Strong, Direction of a Play for Ivo van Hove, and Lighting Design and Scenic Design of a Play for Jan Versweyveld. Despite closing on February 21, 2016, three weeks earlier in its season than “Jitney,” it won two Tonys for Revival and Direction. With a handful of revivals yet to begin performances, “Jitney” seems destined at this moment to earn as many nominations as “Bridge,” if not more.