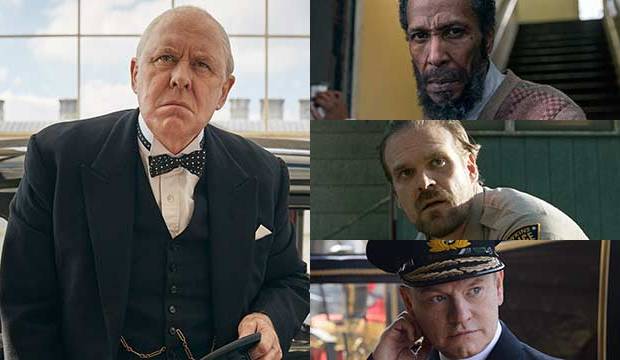 John Lithgow (“The Crown”) is the favorite to win Best Drama Supporting Actor at the Emmys according to our latest predictions, and he has seemed close to indomitable since “The Crown” premiered last fall. The Emmys already love Lithgow: he has won five times out of 11 nominations. On top of that, such a showy, historical role as British Prime Minister Winston Churchill should be catnip to voters. But is he really a lock?

Lithgow won a SAG Award and Critics’ Choice Award for his performance, but he has already proved vulnerable this awards season. He lost the Golden Globe for Best TV Supporting Actor even though the Hollywood Foreign Press picked “The Crown” as Best TV Drama Series. But that award ended up going to Hugh Laurie for “The Night Manager,” who competed at 2016’s Emmys in the movie/miniseries categories, so he won’t be a threat to Lithgow this year. Then Lithgow also lost the BAFTA Award for Best Supporting Actor, but once again that went to a “Night Manager” actor, Tom Hollander, who won’t be a factor in this Emmy race.

But if there are signs of vulnerability in Lithgow, who could capitalize among this year’s eligible contenders? In our racetrack odds he’s closely followed by past Emmy nominee Jonathan Banks (“Better Call Saul”), past Emmy and Tony winner Jeffrey Wright (“Westworld”) and Emmy nominee Michael Kelly (“House of Cards”). But that’s not who our forum posters are pointing to for a possible upset. Many of them are keeping their eyes on Ron Cephas Jones, who played a sympathetic, tragic role in this year’s biggest new hit, “This is Us.” He’s the kind of character actor Emmy voters often like in this category, like Ben Mendelsohn in “Bloodline” (2016), Michael Emerson in “Lost” (2009) and Zeljko Ivanek in “Damages” (2008).

David Harbour (“Stranger Things”) is also a veteran character actor prompting discussion in our forums. And then there’s Lithgow’s “Crown” co-star Jared Harris, a past Emmy nominee in this category for “Mad Men” (2012). Harris also plays a notable real life role (King George VI, the same role that won Colin Firth an Oscar in “The King’s Speech”), so he could pull off an upset against Lithgow, or perhaps split votes with Lithgow leading to a win for one of their competitors.

Check out some of our forum posters’ discussion below, and join the debate here.

Andy Macca McGaw: “I’m imagining Gus Fring vs The Trinity Killer. Esposito will probably split the vote between himself and Banks, but so could Lithgow and Harris. I’m still pretty confident for Lithgow.”

Riley: “If anyone is going to upset John Lithgow, it is going to be Ron Cephas Jones. Is John Lithgow giving a towering, undeniable performance like Julia Louis-Dreyfus? Or is he just Kevin Spacey, a big actor in a big role that the Emmys overlook for someone who has not been so celebrated?”

Graeme ONeil: “I think it’s Lithgow vs. Jones, but Jones might not even be nominated. I think Jones could upset Lithgow just because he’s one of those character actors who has been working forever and this is his most high-profile role ever. And it’s the only time they can honor him for this role (although maybe he can be in a few episodes this upcoming season and be eligible for guest).”

AayaanUpadhyaya: “Lithgow losing that Globe worries me. If ‘This is Us’ has a great showing, and if Harris is nominated here as well, I’ll predict veteran TV actor Cephas Jones.”

Hunterbergfeld: “If Harris does split votes with Lithgow, and Banks splits the votes with Esposito, let’s pretend that’s Harbour and Jones are the other two nominees. I suspect that Harbour would win before Jones. ‘Stranger Things’ is winning so he would have the hype of the show on his side.”

Emmy experts divided: Will ‘The Crown’ or ‘This Is Us’ be named TV’s Best Drama Series?

Mandy Moore, Milo Ventimiglia among 19 'This Is Us' cast members submitted at 2022 Emmys -- which…

Michael Mando ('Better Call Saul'): 'Riding a roller coaster and you have no idea when it's going to…