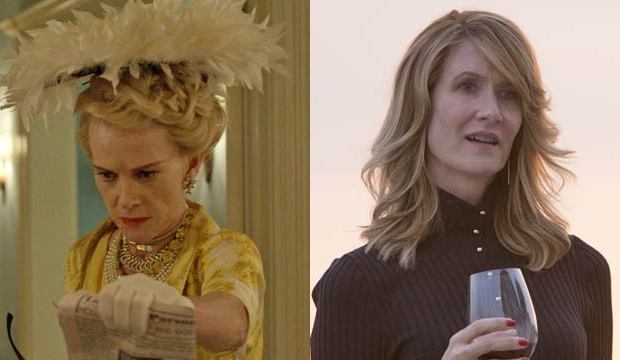 Best Movie/Mini Supporting Actress at the 2017 Emmy Awards is a race between Judy Davis (“Feud: Bette and Joan”) and Laura Dern (“Big Little Lies”) according to our experts. As of this writing we’ve polled 15 journalists from top media outlets for their picks, and it looks like this race could end in any number of ways.

History shows that it’s wise not to underestimate Davis. She has been nominated 11 times, winning three: Best Movie/Mini Actress for “Life with Judy Garland: Me and My Shadows” (2001) and Best Movie/Mini Supporting Actress for “Serving in Silence: The Margarethe Cammermeyer Story” (1995) and “The Starter Wife” (2007). She plays a real-life, larger-than-life personality in the FX’s “Feud”: infamous gossip columnist Hedda Hopper, who is alternately an ally of Joan Crawford (Jessica Lange) and a thorn in her side.

Four experts are betting that the TV academy will instead reward Dern: Eric Deggans (NPR), Paul Sheehan (Gold Derby), Ken Tucker (Yahoo) and Glenn Whipp (LA Times). Dern might be an appealing choice to voters because she plays a prominent, emotionally showy role in “Big Little Lies”: protective and combative working mother Renata Klein. Emmy voters may also wish to make up for the fact that Dern has never won before despite five nominations in the last 25 years. It also helps Dern’s case that “Big Little Lies” was written by David E. Kelley, whose TV shows have won literally dozens of acting Emmys over the years.

But Davis and Dern aren’t the only strong contenders in this race. Matthew Jacobs (Huffington Post) thinks Sarah Paulson will win for “American Horror Story: Roanoke.” Paulson won her first Emmy last year for her leading role in “The People v. O.J. Simpson”; that was her sixth nomination at the Emmys, so now that she’s a winner, maybe she’ll continue that streak.

Kerr Lordygan (Rotten Tomatoes) is predicting a win for Dern’s “Big Little Lies” co-star Shailene Woodley as single mother and sexual assault survivor Jane Chapman. She has never been nominated before, but the 25-year-old actress has already put together an impressive resume that includes the Oscar winning film “The Descendants” (2011), the acclaimed indie romance “The Spectacular Now” (2013) and the hit young-adult romantic drama “The Fault in Our Stars” (2014).

Jarett Wieselman (Buzzfeed) forecasts a victory for Michelle Pfeiffer for HBO’s telefilm “The Wizard of Lies.” She plays Ruth Madoff, the wife of corrupt Wall Street financier Bernie Madoff (Robert De Niro) who learns her husband swindled billions of dollars from investors. Pfeiffer is primarily known for her work on the big screen, so she has never been nominated for an Emmy, but she’s a three-time Oscar nominee, and Emmy voters love to honor respected movie stars who make the move to TV.

Perhaps surprisingly, none of our experts are predicting a victory for Regina King (“American Crime”), even though she’s the two-time defending champion for her different roles in the ABC anthology series. But 13 out of 15 of them expect her to receive another nomination. “Crime” was cancelled this year after its third season, which explored the subject of human trafficking and the exploitation of labor.

‘The Wizard of Lies’ reviews: Robert De Niro ‘gives one of his best screen performances in years’

Seven experts predict a nom for Mary Elizabeth Winstead (“Fargo”). She has yet to be nominated for a Primetime Emmy, but she did win a Daytime Emmy in 2013 for Best New Approaches Program for “The Beauty Inside.” And “Fargo” has been an Emmy favorite with eight acting nominations for its first two seasons.

Be sure to make your Emmy predictions. Weigh in now with your picks so that Hollywood insiders can see how their TV shows and performers are faring in our Emmy odds. You can keep changing your predictions until just before nominees are announced on July 13. And join in the fierce debate over the 2017 Emmys taking place right now with Hollywood insiders in our TV forums. And keep up with the latest Gold Derby entertainment news.

Cannes 2022 programming leaks include returning veterans, Hollywood blockbusters, and a rumor about…

Oscars 2022: Who are the 10 newest presenters added to Sunday's ceremony?

Who are the 4 actors who swept the TV awards (Emmys, Globes, SAG, Critics, TCAs)?