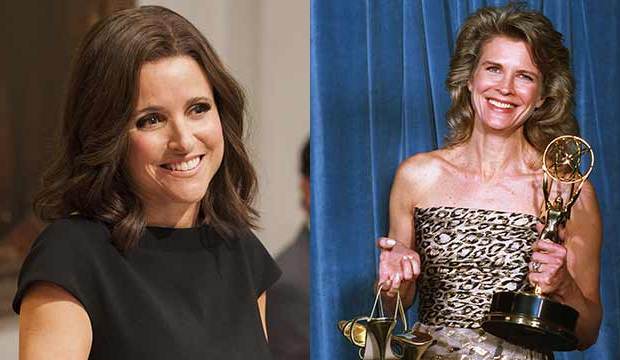 Julia Louis-Dreyfus has been on an unstoppable run when it comes to winning the Emmy for Best Comedy Actress. She has won the award for the past five years in a row, and before that she won the category once for “The New Adventures of Old Christine” (2006), so she has surpassed Candice Bergen and Mary Tyler Moore for the record of most total wins ever in this category with six.

But even if Louis-Dreyfus breaks the record she currently shares with Bergen, there may always be a little asterisk on it since Bergen famously took herself out of Emmy consideration after her fifth win in 1995 since she felt she was being unfairly singled out among the ensemble of “Murphy Brown” (no other regular cast member ever won an Emmy for that show). “Murphy Brown” stayed on the air for another three seasons after Bergen bowed out, so perhaps she could have won a sixth, seventh, or even eighth Emmy if she kept her name on the ballot.

Louis-Dreyfus has been unbeatable in the last few years due in part to the show’s popularity — like “Murphy Brown,” “Veep” has won two Emmys for Best Comedy Series — but perhaps also due to a difference in the competition. When Bergen was winning awards she was competing with other classic performances by Roseanne Barr (“Roseanne”), Kirstie Alley (“Cheers”), and various “Golden Girls” and “Designing Women.” Moore also faced stiff competition in her years of dominance from people like Jean Stapleton (“All in the Family”), Bea Arthur (“Maude”) and “Mary Tyler Moore Show” spinoff star Valerie Harper (“Rhoda”).

But the competition is heating up now for Louis-Dreyfus, perhaps more than ever before. She could be vulnerable to people such as Tracee Ellis Ross (“Black-ish”) who won the Golden Globe in this category earlier this year, or long time Emmy favorite Lily Tomlin for “Grace and Frankie.” And let’s not forget Allison Janney (“Mom”), moving up after winning twice in the supporting category (2014-2015). And several roles have spear-headed their own series as writers and producers like Issa Rae (“Insecure”), Phoebe Waller-Bridge (“Fleabag”), Pamela Adlon (“Better Things”), Sharon Horgan (“Catastrophe”) and past nominee Lena Dunham (“Girls”) in her last season in contention. So if Emmy voters want a Comedy Actress alternative this year to keep Louis-Dreyfus from surpassing Bergen’s record, they have plenty of options.