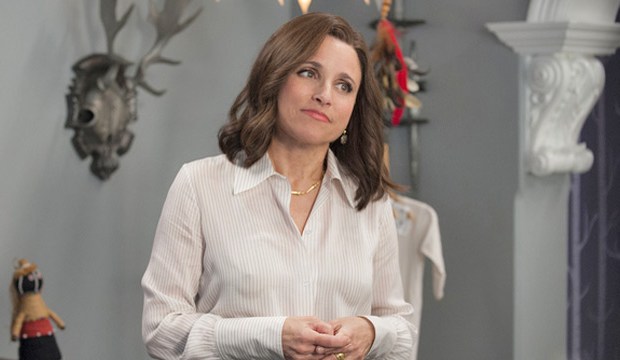 Julia Louis-Dreyfus has won a record five straight Emmys as Best Comedy Actress for playing ex-President Selina Meyer on HBO’s “Veep,” and now she’s in striking distance to win again. In our recent poll, we asked our readers which episode from “Veep’s” sixth season could win her Emmy #6, and a whopping 52% voted for “Groundbreaking.” That’s the Season 6 finale in which various flashbacks reveal different sides of Selina, including giving birth to her daughter and discovering that her husband Andrew (David Pasquesi) is cheating on her. Do you agree that “Groundbreaking” should be Louis-Dreyfus’ 2017 Emmy submission? Let us know down in the comments section.

The fifth episode, “Chicklet,” came in second place with 18% of the vote. Our “Veep” recapper David Buchanan noted that Louis-Dreyfus gave an “Emmy-worthy performance” in this half-hour in which Selina deals with her daddy issues by getting drunk, destroying his old barn full of memories, and then smashing her car through the wall.

The only other episode to gain double-digit support from poll respondents was the seventh outing, “Blurb,” at 11%. In this fun episode, Louis-Dreyfus’ Selina goes head-to-head with Hugh Laurie‘s Tom James after he accuses her of sexual misconduct in an effort to prevent her from revealing their affair in her new memoir.

Louis-Dreyfus is an expert for choosing the right episode to submit to Emmy voters, as she’s won five in a row for “Veep” (2012-2016), one for “The New Adventures of Old Christine” (2006) and another for “Seinfeld” (1996). While there is no perfect formula, Gold Derby has noticed over the years that episodes showcasing the specific performer’s range, impact and empathy often have a great chance of success.