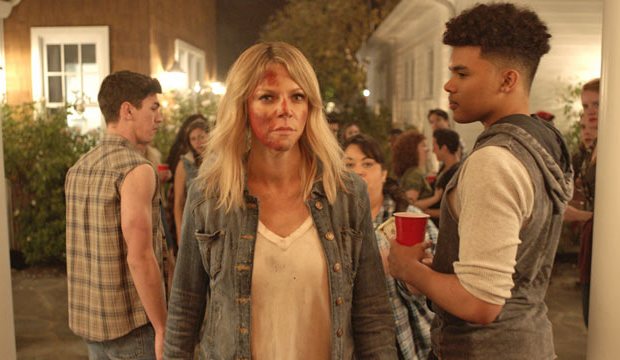 Emmy voters, listen up. Kaitlin Olson has given you 12 seasons (and counting) of her hilariously vain character Deandra “Sweet Dee” Reynolds on FXX’s hit series “It’s Always Sunny in Philadelphia.” Unfortunately, even though she’s given some of the strongest comedic work on TV, you’ve chosen to snub her. Now, however, she’s headlining Fox’s new hit series “The Mick” and her work here is so strong that ignoring it would warrant Sweet Dee “getting in your face and pointing out all your faults.”

“The Mick” centers around loser sister Mackenzie (Olson), who ends up having to take care of her rich and spoiled nephews and niece after her filthy rich sister Poodle and husband are arrested for fraud — then end up fleeing the country. It’s a rather simple set-up which you’d think would trip all over itself from cliches and stereotypes, but “The Mick” instead decides to focus on originality, straight-up laughs, and some aggressive physical humor. Of course as much as the show separates itself from the ordinary, what Olson does with Mackenzie should separate her from a crowded Best Comedy Actress race.

Mackenzie is definitely not a “root-for-me” character. She’s a heavy drinker, sloppy, careless, kind of evil, and is really only into caring for her nephews and niece so she can live the life of a millionaire. With so many negatives attached to her Olson doesn’t just play to those traits — she is just too damn funny and talented an actress for that. Instead she leaves you unphased by all of that and brings out Mackenzie’s heart … as cold as it sometimes may be.

Dish ‘The Mick’ with Hollywood insiders in our notorious forums

In recent episode “The Mess,” which would make an excellent submission at the Emmy Awards (along with “Pilot” and “The Balloon”), Mackenzie has had it with the disrespect she is being shown by the kids so she decides to enforce some rules. She goes into parent mode, which she has no experience in, and insists they clean the house or she will call some unsuspecting parents whose child is throwing a big party and spoil the entire thing. When she returns to a clean house she thinks all is well, until she goes into her room and notices all the mess has been swept in there and the kids the close the door behind her and lock her in. Showing that aforementioned physical humor, Mackenzie leaps from the balcony onto the car and falls onto the pavement, getting all scratched up. They drive away, but Mackenzie is ruthless and goes to the party to track each one down. She finds the youngest, Ben (Jack Stanton), and spanks him in front of all the party-goers. Immediately we see Mackenzie regret her decision as she has this underlying love for the kids that they may not see, but that we the audience clearly pick up on.

Back at the house she apologizes and makes amends and offers to take the kids to dinner, but in true Mick form she instead takes them to a remote location, drops them off, and makes them find their way home. They soon realize that she is definitely in charge and will always be a step ahead of them. It’s an episode which could have two rooting stances but thanks to the naivety, humor and heart that Olson gives Mackenzie here, there was really only one stance. One that you should be mindful of, fellow Emmy voters: always side with “The Mick.”

Emmy slugfest: Comedy races will be led by 'Veep' and Julia Louis-Dreyfus yet again [WATCH]

Emmys 2017: Predictions center now open for your earliest winner and nominee picks ever