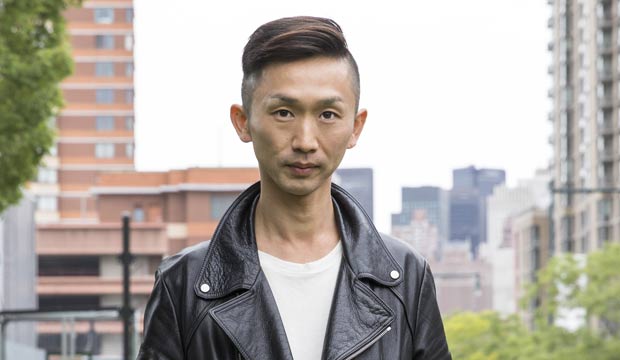 Always friendly and hard-working, Kentaro Kameyama has carved out a space on “Project Runway” as not only a person the other designers like to be around, but an artist that they all respect and admire. The judges think Kentaro is a thoughtful and innovative designer, but their critique of his confusing and inconsistent two-look preview of his collection during “Finale, Part 1” was harsh. To win, Kentaro has the daunting task of re-working his collection to find a consistency in style and bring a cohesion to the line before his models walk the runway.

“Finale, Part 2” airs Thursday, November 16, so before Kentaro and the other three finalists show their full collections at New York Fashion Week let’s consider the pros and cons of his chances to win season 16.

Throughout the season Kentaro earned high marks from the judges for his flawless tailoring and the perfect fit of his garments. The work he shows is always clean, interesting, and full of ideas, so it wouldn’t be a surprise to see the judges reward his professionalism.

When Kentaro scores well with the judges, he scores really well — he got four high scores during the season, including a design challenge win for “Models Off Duty.” As Heidi Klum always says, “In fashion, one day you’re in, and the next you’re out,” and that has never been more true than it has been for Kentaro. He evokes strong reactions with all of his work (including three low scores), which goes to show how strong his point of view is and that he is a compelling artist capable to making people think about his work. That’s a high standard for any designer to reach and I think the judges really respect him for it.

When Kentaro showed his collection-in-progress to Tim Gunn, Tim grilled him on why he’d chosen to avoid building a cohesive vision across the line. Tim’s fears that Kentaro had missed the mark were confirmed when the judges expressed the same concern during the official preview. Kentaro’s biggest strength is his vision, but his inability to communicate that vision clearly to the judges has proved to be a tough hurdle for him to jump.

The last stretch of the competition was tough for Kentaro, resulting in back-to-back bottom two placements in the final challenges. I think the judges spared him from elimination because of his success earlier in the competition, but that will hold little weight now that the panel is tasked with choosing only one winner and three runners-up.

How do you feel about Kentaro’s chances to win and what we’ve seen of his collection so far? Sound off in the comments.