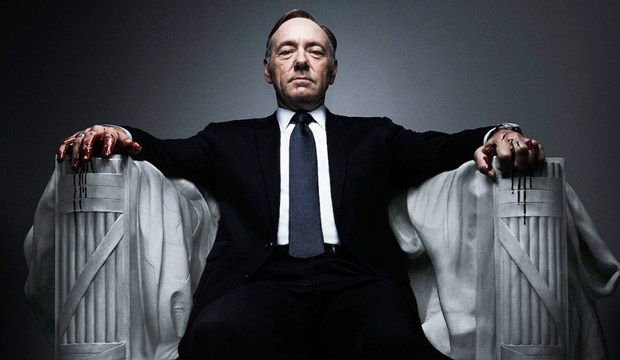 Recently earning his fifth consecutive Emmy nomination for his performance as Francis J. Underwood on Netflix’s “House of Cards” is Kevin Spacey. On the hit series, he’s gone from a Democrat from South Carolina’s 5th congressional district and House Majority Whip to the President of the United States. Now he may finally go from perennial Emmy nominee to first-time Emmy winner.

Throughout his career, Spacey has won a Tony Award (in 1991 for Neil Simon’s “Lost in Yonkers”) and two Oscars (in 1996 for “The Usual Suspects” and in 2000 for “American Beauty”). At the Emmys, however, he has so far received 11 nominations, but still has yet to win. If he were to take Best Drama Actor this year for his performance as Frank Underwood, he’ll have completed the Triple Crown in acting at last. And it would be the last feather in his cap for this role: “House of Cards” already won Spacey his very first Golden Globe in 2015 after seven previous career losses and two Screen Actors Guild Awards for Best TV Drama Actor (2015-2016).

Jeff Jensen (Entertainment Weekly) writes about Spacey’s performance, “Whether Frank is railing against enemies who dare to investigate his undeniable murk, or pushing along a conspiracy to steal an election by manipulating fears of terrorism or executing voter suppression schemes, Spacey seems invigorated by the material, and perhaps, our moment. Adds Chelsea Tatham (Tampa Bay Times), “Spacey’s President Underwood continues to go for a mix of LBJ and Bill Clinton while also acting like a charming sociopath and exuding smug confidence.”

In addition to sheer performance quality there are two key factors that could help Spacey finally win an Emmy this year.

The first four seasons of “House of Cards” have debuted between the months of February and March. But the fifth season debuted on May 30, just the day before the eligibility period for this year’s Emmys ended. Therefore, the newest season is fresher in Emmy voters minds. Also, given the current political climate of the United States, with corruptions and controversies plaguing the Donald Trump White House, some voters would probably like to make a statement about that.

Not only does Spacey have the new season of “House of Cards” out, but he also recently got to show off his versatility as a performer when he hosted this year’s Tony Awards on June 11. That helped Neil Patrick Harris win his first two Emmys. He first hosted the Tonys in June 2009; the next year he won Best Special Class Program along with another prize for guest starring on “Glee.”

It was only a few days after this year’s Tonys when Spacey performed a one-man show as U.S. lawyer Clarence Darrow at Arthur Ashe Stadium in Flushing, New York. He also has a supporting role in the summer sleeper hit, “Baby Driver” which also happens to be one of the best-reviewed films of the year so far.

This wouldn’t be the first time an actor has won an Emmy after a big-screen summer hit. Just last year Kate McKinnon won Best Comedy Supporting Actress for “Saturday Night Live” after appearing that summer in “Ghostbusters.” Before that Melissa McCarthy won Best Comedy Actress for “Mike and Molly” in 2011 just a couple of months after the release of her breakthrough feature film “Bridesmaids.” And back in 2007 Katherine Heigl claimed Best Drama Supporting Actress for “Grey’s Anatomy” after her feature film “Knocked Up” cleaned up at the box office. All three of those victories came as a surprise, which shows the power of the movies, even at TV’s biggest event.

Do you think Spacey has the secret advantage in this year’s race for Best Drama Actor?