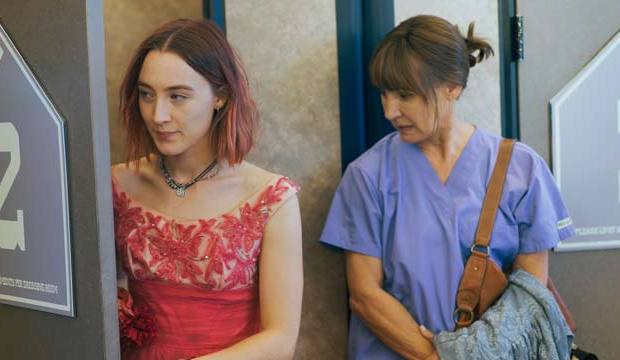 “Lady Bird” opened on Friday, November 3, to some of the best reviews of the year. As of this writing it has a MetaCritic score of 94 and perfect 100% freshness on Rotten Tomatoes — time will tell if a few critics eventually ruin its perfect game. That’s good news for the film’s Oscar chances. Star Saoirse Ronan is a contender for Best Actress, and co-star Laurie Metcalf is the current frontrunner for Best Supporting Actress. In addition, writer-director Greta Gerwig could be doubly nominated. If she contends for Best Director she would be only the fifth woman ever to do so.

The film is not strictly autobiographical, according to Gerwig, though it does feel quite personal. It tells the story of its title character (Ronan), whose given name is Christine and who is struggling to find herself during her senior year of high school in Sacramento, a hometown she is desperate to escape. Emmy and Tony winner Metcalf plays her mother, with whom she frequently clashes, and Tony winning actor and playwright Tracy Letts plays her struggling father.

Most critics are wildly enthusiastic about the film, which is being described as “a joy from start to finish.” It’s “one of the more accomplished female-led coming-of-age tales since the Golden Age of John Hughes,” and Gerwig achieves “one of the better solo directing debuts by an actor in recent memory.” Gerwig is also earning raves for her “exceptionally well-written” original screenplay, which is “exceptionally well acted” by a cast where “everyone shines,” especially Ronan and Metcalf in their scenes together.

Check out some of the reviews below, and discuss this and more with your fellow movie fans in our forums.

Susan Wloszczyna (RogerEbert.com): “The push-pull of their conflicting points of view, informed by fear of the unknown and begrudging expressions of affection, is the energy that drives one of the more accomplished female-led coming-of-age tales since the Golden Age of John Hughes … It is also one of the better solo directing debuts by an actor in recent memory.”

Lara Zarum (Village Voice): “A heartfelt coming-of-age story that perfectly captures the bittersweet transition from adolescence to dawning adulthood, Gerwig’s directorial debut is a joy from start to finish, a warm, generous snapshot of teenage vulnerability and exuberance.”

Dana Stevens (Slate): “‘Lady Bird’ finds fresh purchase in well-trodden territory by observing the human carnival from a girl’s point of view … Everyone shines, but the glow is especially strong in the scenes between Ronan, who has been reliably delivering impeccable performances since her big-screen debut at age 12 in ‘Atonement,’ and Metcalf, an Emmy- and Tony-winning actress whom too many people still remember mainly as Roseanne’s little sister. “

A.O. Scott (New York Times): “What Ms. Gerwig has done — and it’s by no means a small accomplishment — is to infuse one of the most convention-bound, rose-colored genres in American cinema with freshness and surprise … The script is exceptionally well-written, full of wordplay and lively argument. Every line sounds like something a person might actually say, which means that the movie is also exceptionally well acted.”