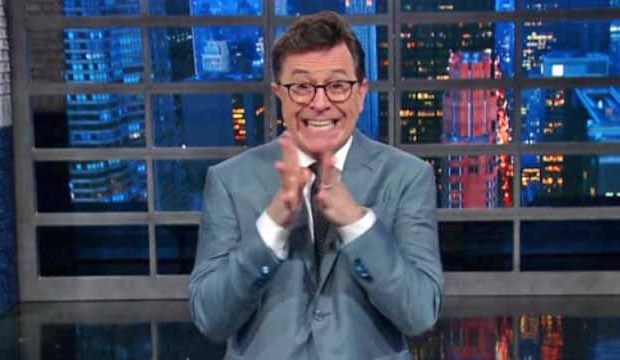 Gold Derby can exclusively reveal that “Late Show with Stephen Colbert” is entering the episode featuring guests Mayim Bialik, Andy Karl, and Ramy Youssef as its Emmy submission for Best Variety Talk Series. This installment is the May 11 episode of the 2nd season for the CBS show. In this segment, Stephen Colbert uses his monologue to hilariously and gleefully respond to a media attack by President Donald Trump on the talk show host. Trump had said: “You see a no-talent guy like Colbert. There’s nothing funny about what he says. And what he says is filthy. And you have kids watching. And it only builds up my base. It only helps me, people like him. The guy was dying. By the way they were going to take him off television, then he started attacking me and he started doing better.”

Colbert is nominated in this category for the first time with this program against last year’s champion “Last Week Tonight with John Oliver” plus “Full Frontal with Samantha Bee,” “Jimmy Kimmel Live,” “Late Late Show with James Corden,” and “Real Time with Bill Maher.” The show also has “Stephen Colbert’s Live Election Night” competing for Best Variety Special. His prior show “The Colbert Report” prevailed as Best Variety Series in 2013 and 2014.