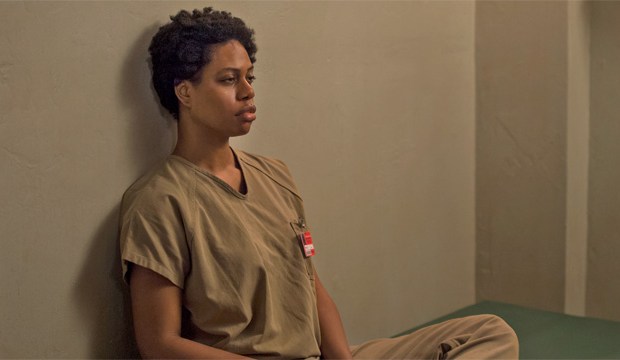 Laverne Cox has received her second Emmy nomination for playing inmate Sophia Burset in Netflix’s “Orange is the New Black.” Having previously made history as the first openly transgender person nominated for an acting Emmy, she can now say she is the first to receive two nominations as well.

Cox was previously nominated in 2014 for the first season of “Orange is the New Black,” for Best Comedy Guest Actress. Now that the Emmys have forced the show to compete as a drama series, Cox is nominated in Best Drama Guest Actress at this year’s Emmys. She has submitted the fourth episode of Season 4 for consideration, titled “Doctor Psycho.”

After Caputo (Nick Sandow) ignores Sophia’s requests to review the decision of her being in SHU, she stages several protests for her release — from stuffing her clothing down the toilet to clog it up, to lighting her cell on fire. Can Cox enter the Emmy record book as the first transgender performer to take home a trophy? Let’s dive deeper into “Doctor Psycho.”

Cox only appears in three scenes in her submission, but each of them is an acting showcase. There is heartbreaking desperation in her voice as she begs a guard to see Caputo, and later as she tries to make an emotional appeal to him. As she resorts to clogging the toilet and setting fire to her cell, we are made to understand why Sophia is resorting to such actions while also delighting in her rebellious nature, and that’s all thanks to Cox’s raw acting.

One of the biggest factors in Cox’s favor is that we see her character in a different light. Gone are the stylish locks and fierce makeup we have identified her with in the first three seasons. This “deglam” effect for actresses we typically see as fashionable is often awarded, and Cox is the starkest example of this in the Best Drama Guest Actress category.

Cox may also turn one of her biggest negatives from her first nomination into a positive for her second one. Her Season 1 episode was very dramatic and did not get her the win for Best Comedy Guest Actress, losing to her funnier co-star Uzo Aduba, but now that she’s in Drama Guest Actress, she does not have to worry about the dramatic tone of her performance. Plus, Cox is one the biggest “names” in this category, and voters who do not pay close attention to submissions may check her name because they like her as a person, or if they want to make Emmy history.

“Doctor Psycho” gives Cox a scene at the beginning, the middle, and the end, and while she does have a good mini-arc in this episode, these scenes are also pretty short. In total, she has about four-and-a-half minutes of screen time, and voters can find more substantial material from some of her competitors. However, in a world where “The Americans” guest star Margo Martindale can win two Emmys in a row in this category for sipping coffee at a table for a minute or two, does a lack of screen time really matter anymore?

Another negative for Cox’s winner potential is how Emmy voters seem to feel about “Orange is the New Black.” Nominations have continued to dwindle every year for the Netflix dramedy, and it’s not clear if the TV academy is really watching the show anymore. While Cox was campaigning in the more competitive Drama Supporting Actress race for the past two years, it also shouldn’t be ignored that this is her first nomination since Season 1, which suggests inconsistent support.