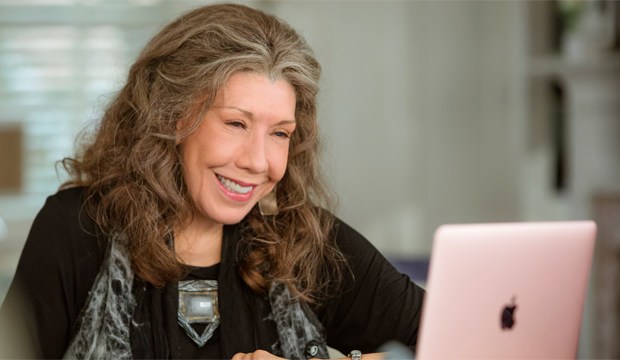 Lily Tomlin is on the verge of receiving her 24th overall Emmy nomination and her third in a row for Best Comedy Actress for her role as the free-spirited Frankie Bergstein on Netflix’s “Grace and Frankie.” Should Tomlin triumph on Emmy night, this would be her seventh career victory (see list of wins below) but surprisingly it would also be the first time she would have won for acting in a role written by other people.

Tomlin’s previous Emmy noms date back as far as the late 1960s for her sketch comedy work on “Laugh-In.” She also has been nominated over the years in a variety of categories including writing (oddly she won for writing on a Paul Simon special) and as recently as 2013 she prevailed for her narration of the documentary “An Apology to Elephants” about endangered elephants. Despite all this success she has never won when simply acting, despite nominations for various scripted shows like “Grace and Frankie” (2015 and 2016), “Damages” (2010) and “Homicide: Life on the Street” (1996).

This follows a pattern in Tomlin’s career in which she has often felt awkward accepting roles that weren’t written by herself or her partner Jane Wagner. Tomlin almost turned down one of the biggest hits of her film career, “9 to 5” (1980), when producer Jane Fonda offered it to her because she felt uneasy doing scripted work. She only agreed to do the film when Fonda promised she would be allowed to improvise lines during the shoot. That system worked well for Tomlin in her film debut in Robert Altman‘s “Nashville” (1975). Altman always had a very improvisational approach to his films and Tomlin thrived in that style. It went so well actually that Tomlin ended up receiving a Best Supporting Actress Oscar nomination for the film.

On Broadway Tomlin won two Tony Awards for her work in her one-woman shows which she wrote with Wagner. She has seemed more willing to take on scripted roles in recent years and was even touted as a possible Oscar nominee for her work in “Grandma” a few years ago, although the nomination did not materialize. Should she be nominated again for “Grace and Frankie” she will face the seemingly unstoppable juggernaut of Julia Louis-Dreyfus who has swept the category for the past five years for the HBO comedy “Veep.” If voters tire of the repetition of constantly rewarding the same actress, Tomlin could emerge as a possible winner.

Here’s the list of Tomlin’s six Emmy victories so far:

1981: Best Variety, Music or Comedy Program for “Lily: Sold Out”

2013: Best Voice-Over Performance for “An Apology to Elephants”