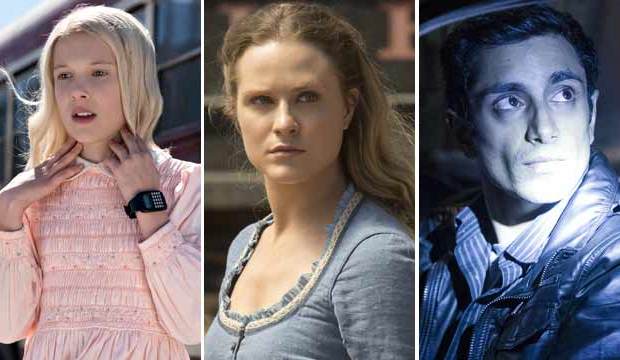 The television academy gave out their first round of Emmys on Saturday night, September 9, during the first round of the Creative Arts Emmys. Those prizes recognized the best in nonfiction, reality, variety, animation, and more, and voters spread the wealth. Four programs had three victories apiece: “13th,” “RuPaul’s Drag Race,” “Saturday Night Live,” and “Hairspray.” But the Sunday night event might be another story entirely. This is where sweeps could happen. Follow along below as we cover the big winners during Sunday night’s ceremony, and check out the complete list of winners here.

The Creative Art Emmys predominantly cover narrative programs: dramas, comedies, movies, and limited series. And that’s where “Game of Thrones” proved dominant the last two years, winning eight times in 2015 and nine times in 2016 on its way to a record 12 total victories both years. But “Game of Thrones” isn’t eligible this time around since its seventh season didn’t premiere until after the May 31 eligibility cutoff date. That leaves many races wide open.

Check out our live webcast here, and below check out our minute-by-minute Creative Arts Emmys report for Sunday night. Then sound off in the comments section about the night’s most surprising winners. Keep refreshing/reloading this page as we’ll be updating live (times posted are Eastern Time).

8:07pm — The first victory of the night might be the most telling: “Veep” wins Best Comedy Casting for the third year in a row. All of the Best Casting winners for comedies, dramas, and movies/limited series have gone on to win their respective program categories for the last two years. However, “Born This Way” won Best Reality Casting last night and lost Best Unstructured Reality Program.

8:11pm — “Stranger Things” claim its first Emmy of the night: Best Main Title Theme Music for Michael Stein and Kyle Dixon. It has 18 total nominations this year. Could we be on our way to a sweep tonight?

8:13pm — A case of vote-splitting? “Master of None” wins Best Picture Editing for the episode “The Thief,” defeating two episodes of “Silicon Valley” and two episodes of “Veep.” That’s the second ever victory for the Netflix series following its win in 2016 for Best Comedy Writing.

8:17pm — “The Big Bang Theory” wins for its multi-camera picture editing. The CBS sitcom has fallen out of favor in top categories, but it has now won this category four years in a row.

8:19pm — “Game of Thrones” was out of the running this year, so it couldn’t claim Best Stunt Coordination. That opened the door for a victory by Marvel’s Netflix series “Luke Cage” on its only nomination this year.

8:21pm — Emmy voters are spreading the wealth tonight. It’s probably not too surprising that Best Period/Fantasy Costumes went to the lavish “The Crown.” That was another category opened up by the absence of “Game of Thrones.” Several Netflix shows have already won prizes tonight including the victories for “Master of None” and “Luke Cage.”

8:25pm — Another win for “The Crown” (Best Production Design) and a first win tonight for “Fargo” (Best Music Composition). “The Crown” is the first program to post multiple victories tonight; it has 13 total nominations this year, including several at next week’s main event primetime telecast.

8:29pm — Daytime Emmys juggernaut makes a leap into primetime with a victory for Best Children’s Program for “Once Upon a Sesame Street Christmas.”

8:32pm — A second victory tonight for “Veep”: Best Half-Hour Production Design. It has never won that category before, which might show even more support for the show than in previous years.

8:34pm — “The Handmaid’s Tale” gets on the board, winning Best Contemporary/Fantasy Production Design. This was another award that had been won by “Game of Thrones” last year. A good sign for the show’s overall chances?

9:01pm — “Saturday Night Live” swept the Comedy Guest Acting awards. Dave Chappelle upset frontrunner Hugh Laurie (“Veep”), while Melissa McCarthy was the expected winner for playing Sean Spicer — among other characters — in her episode of “SNL.” Neither performer bothered to attend the ceremony.

9:03pm — “Westworld” is currently up to three Emmy victories, including Best Visual Effects, another category that “Game of Thrones” had previously taken. “Westworld” has the most nominations this year (22), tied with “SNL,” and both shows have their sights set on a lot more trophies.

9:09pm — “Big Little Lies” gets on the board with its first victory of the night: Best Music Supervision, the first time that award has ever been given out. The HBO mystery is currently our frontrunner to win Best Limited Series, so tonight could tell us if it stays that way.

9:12pm — “Stranger Things” is starting to catch up on “Westworld’s” early lead in total wins. The 1980s-set series just won Best Sound Editing, its second win of the night. It has 18 total bids including Best Drama Series.

9:20pm — Hooray for “The Night Of,” which won Best Movie/Mini Cinematography and Best Sound Editing! (Not that I’m biased or anything.) Those are the first wins for the crime series, which has 13 total nominations, including Best Limited Series.

9:27pm — “The Night Of” picking up steam with its third victory of the night: Best Sound Mixing! That makes it the most awarded limited series of the night so far (not that I’m biased), but there’s a long way to go, of course.

9:33pm — “Westworld” is up to four wins thanks to its prize for Best Hairstyling, which gives it the lead among dramas. But “Stranger Things” grabbed its third victory with Best Main Title Design, so it’s keeping up.

9:46pm — “The Night Of” notches its fourth victory of the night: Best Picture Editing. But “Big Little Lies” added it second victory, Best Contemporary Costumes, and then a third, Best Casting. Best Casting may be a decisive victory. As noted above, Best Casting has had 100% track record predicting program awards in the last two years.

9:53pm — “Gilmore Girls” fans rejoice! Not only Melissa McCarthy win for “SNL,” Alexis Bledel just claimed Best Drama Guest Actress for “The Handmaid’s Tale.” The Hulu series has won two awards tonight so far, and there’s one more “Gilmore” alum nominated for an Emmy this year: Milo Ventimiglia for Best Drama Actor for “This is Us.”

9:56pm — “Stranger Things” defeated four other freshman shows for Best Drama Casting. “Game of Thrones” previously won that award for the last two years in a row on its way to two straight Best Drama Series victories. And then it won Best Picture Editing too, another “Thrones”-won race from 2016.

10:03pm — “Veep” is having a better-than-usual night at the Creative Arts Emmys. It just won Best Cinematography, in addition to Best Casting and Best Production Design. Last year it only won Best Casting before taking Best Comedy Series. Is it looking even stronger this year?

10:05pm — “The Handmaid’s Tale” wins Best Cinematography. That bring it to three prizes, but it still trails “Stranger Things” (five) and “Westworld” (four) at the moment.

10:18pm — “This is Us” didn’t have many chances to win tonight — most of its categories will be decided next week. But the last award of the night brought the show its first win and Gerald McRaney a long overdue first Emmy: Best Drama Guest Actor.

10:21pm — “Stranger Things” and “Westworld” are the biggest winners of the night with five apiece, but neither pulled off an overwhelming sweep. “The Night Of” was close behind with four. “SNL’s” two wins tonight brought it to a total of five for the weekend with more to come next week. “Big Little Lies,” “Veep,” and “The Handmaid’s Tale” both won three times.