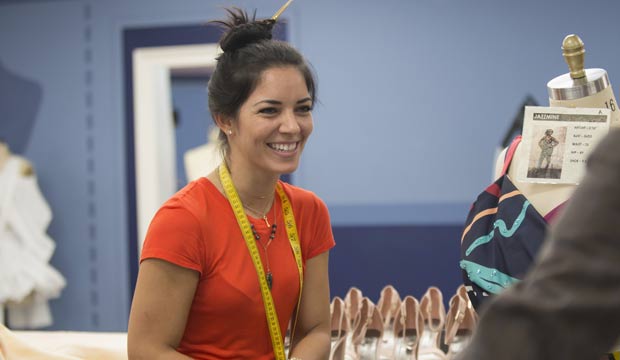 It’s been a season of ups and downs for Margarita Alvarez, who heads into the “Project Runway” finale as the biggest underdog of the four finalists. Throughout the competition, Margarita heard from the judges that she needed to take more risks and define more clearly what her point of view is. Well, taking inspiration from her past and her home of Puerto Rico, Margarita finally demonstrated to the judges who she is as a designer by previewing her bright and bold final collection during “Finale, Part 1,” earning a spot in the final four.

“Finale, Part 2” airs Thursday, November 16, so before Margarita and the other three season 16 finalists show their full collections at New York Fashion Week, let’s consider the pros and cons of her chances to win.

The judges responded really well to Margarita’s bold use of color in her finale collection. The story of her pulling inspiration from her parents’ couch from the 1980s to create one-of-a-kind textiles and patterns not only shows her ability to be both creative and innovative, but will translate easily in front of the live NYFW audience when her models walk the runway.

Margarita’s journey on the show has been an emotional one, with both really high highs and really low lows. Because of that she has been forced to prove herself each week by maintaining focus and pushing herself to the creative limit. When looking at this group of finalists, I think it’s safe to say that Margarita has worked the hardest for her spot in the finale.

Of the final four, Margarita’s challenge record is one of the least impressive–she boasts only one win and no runner-up placements. Furthermore, Margarita was repeatedly told by the judges that they were still unclear of who she is as a designer. Unlike some of her peers, Margarita’s work week-to-week never had a clear point of view, so they often wondered what her niche in the industry would be.

Margarita’s worst moment of the season came in episodes eight and night when she and close friend Michael Brambila accused Claire Buitendorp of not only stealing their ideas, but outright cheating by breaking game rules. Though Margarita and Michael were vindicated by Claire’s admission that she had indeed broken the rules, the two came off as petty and jealous of how well Claire had scored with the judges in that challenge. It’s hard to imagine that the judges won’t take that incident into consideration when evaluating who should represent the season as its winner.

According to our current predictions, Margarita is the designer most likely to finish in 4th place, topping that question with 21/20 odds, effectively making her the least likely to be named the winner.

How do you feel about Margarita’s chances to win and what we’ve seen of her collection so far? Sound off in the comments!