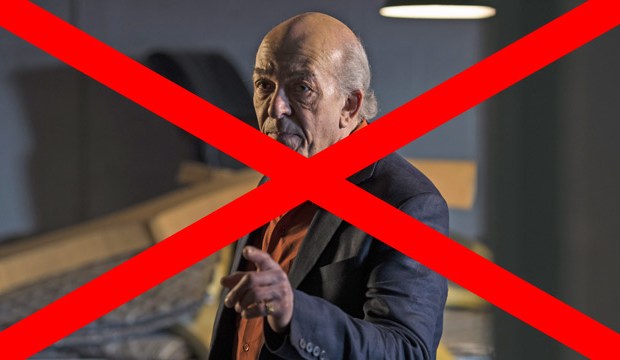 The 50% guest star rule at the Emmys has claimed another victim: Mark Margolis (“Better Call Saul”). Margolis has been removed from the 2017 Emmy ballot after Gold Derby questioned his eligibility in the race for Best Guest Actor in a Drama Series. Including Monday’s season finale, Margolis appeared in five of 10 episodes, or 50%, which makes him ineligible to compete in the guest categories. AMC could have submitted him on the supporting Emmy ballot, but it is now too late to make that change.

A Television Academy spokesman tells Gold Derby: “There was an error in AMC’s entry submission, and pursuant to 69th Emmy Awards rules, this entry will be disqualified. Had this not been brought to the Academy’s attention now, it would have surfaced after the Nomination Round votes are tallied, during the vetting of all nominees prior to our announcement on July 13.”

Margolis plays drug cartel leader Hector Salamanca on the AMC spinoff series, the same role that earned him an Emmy nom back in 2012 on “Breaking Bad.” He now joins a shortlist of other guest actors who’ve been disqualified from Emmy eligibility because they appeared in too many episodes, including “Veep” guest star Peter MacNicol whose nomination ultimately had to be rescinded by the TV academy. And just like Margolis, “The Last Man on Earth’s” Jason Sudeikis was removed from the nominations ballot last year at this same stage.

We contacted AMC for comment, but did not hear back by press time.

The Emmys’ 50% rule was created two years ago as a way to prevent recurring players from competing against true guest stars, as was beginning to happen quite a bit. For example, John Lithgow starred in every episode of “Dexter” Season 4, but he won Best Drama Guest Actor at the 2010 Emmys. And for the first season of “Orange is the New Black,” Uzo Aduba won the Best Comedy Guest Actress trophy in 2014 despite popping up in 12 of the 13 hours.

“It is the decision of the entrant whether to enter as a lead, supporting or guest performer,” states the official Emmy rulebook. “However, only performers appearing in less than 50% of the eligible episodes are able to submit in the Guest Performer categories.”