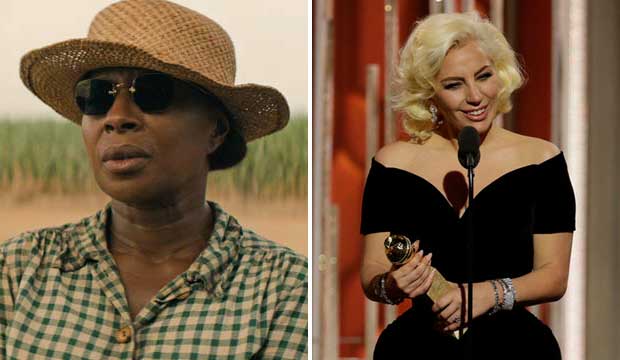 Will Mary J. Blige be the latest musician to win a Golden Globe for acting? She has been receiving praise for her role as Florence Jackson, a 1940s sharecropper helping to support her family in the Netflix film “Mudbound,” and she recently picked up a Hollywood Film Award for her breakthrough performance. She could be on her way to an Oscar nomination, and an important step on the campaign trail is the Golden Globes. The good news for Blige as the Hollywood Foreign Press Association that decides the Globes has been especially generous to singers-turned-actors.

For instance, in 1997 there were two recording artists getting awards buzz for their acting performances: Madonna (“Evita”) and Courtney Love (“The People vs. Larry Flynt”). Neither of them received Oscar nominations, but they both earned Golden Globe bids. Love was up for Best Film Drama Actress, while Madonna actually won Best Film Comedy/Musical Actress. That was especially significant because Madonna actually beat the eventual Oscar winner that year, Frances McDormand (“Fargo”).

A few years later, in 2001, Icelandic singer Bjork earned a nomination for Best Film Drama Actress for her breakthrough role in Lars von Trier‘s “Dancer in the Dark.” Then Beyonce picked up a bid for Best Film Comedy/Musical Actress for “Dreamgirls” in 2007. Rapper-turned-actor Will Smith has earned five Globe nominations between film and TV, and there’s additional precedent on the TV side with Lady Gaga winning Best TV Movie/Limited Series Actress in 2016 for “American Horror Story: Hotel” and Mandy Moore picking up a Best TV Supporting Actress bid in 2017 for “This is Us.”

It doesn’t hurt Blige’s case that she’s already a Golden Globe nominee. She earned a bid for Best Original Song for “The Living Proof” from “The Help” in 2012, so we already know she’s on their radar, and this kind of breakthrough dramatic role is such a creative departure that the Hollywood Foreign Press might be even more inclined to stand up and take notice. We’ve polled numerous Expert film journalists for their Globe picks, and as of this writing three are forecasting a bid for Blige: Thelma Adams (Gold Derby), Tom O’Neil (Gold Derby), and Peter Travers (Rolling Stone). Are they right? And might they even be underestimating her for the win?