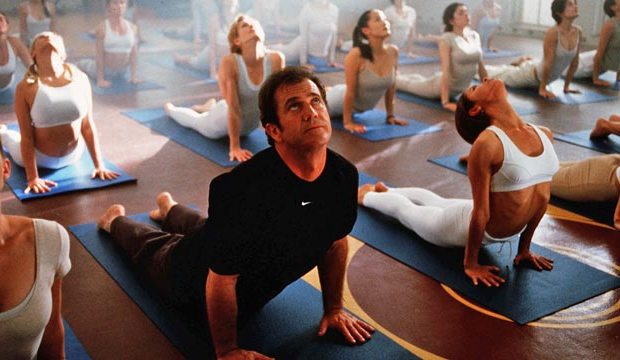 Mel Gibson was one of the most famous stars and directors in Hollywood throughout the 1980s, 1990s and early 2000s. He then had public and private meltdowns with anti-semitic comments and other tirades that caused his career to take a major pause. But is much of it forgiven now that Oscar voters welcomed him back in the Best Director category for the 2016 film “Hacksaw Ridge”?

In his pre-scandal days, Mel Gibson displayed a distinct flair for comedy, from the “Lethal Weapon” films to “What Women Want,” for which Gibson won a Golden Globe in 2000. He returned to those comedy roots earlier this month on the nation’s screens in “Daddy’s Home 2,” in which he plays his ultra-macho public image for laughs. The movie also stars Mark Wahlberg, Will Ferrell, and John Lithgow.

In addition to his acting skills, Gibson is, of course, an Academy Award-winning director and producer (1995’s “Braveheart”) who has parlayed his skills for directing action in such films as “Apocalypto” (2006) and his controversial box-office bonanza “The Passion of the Christ” (2004). Let’s take a look at the rise and fall and rise again in Gibson’s 12 best films in his career, ranked worst to best, whether he was starring or directing.

12. WHAT WOMEN WANT (2000)
Although subsequent events in Gibson’s personal life might make the idea seem strange now, in 2000, Gibson was very much considered a romantic leading man. In what is arguably the best of his comedies, Gibson is Nick Marshall, a sexist Chicago advertising director, who is given the unenviable task (for him) of trying to reach out to female consumers.

11. THE BOUNTY (1984)
Roger Donaldson‘s film was the third large-scale Hollywood swing at “Mutiny on the Bounty,” coming after the 1935 version with Clark Gable as Fletcher Christian and Charles Laughton as Captain Bligh, followed by 1962’s remake with Marlon Brando and Trevor Howard in the same roles respectively.

10. SIGNS (2002)
In what is probably the last critically-appreciated film by M. Night Shyamalan before he fell into a 15 year-long abyss of not-so-great reviews, Gibson starred as Graham Hess, an ex-priest who lives with his family on a small Pennsylvania farm.

SEEHalloween treats: Top 13 scariest movies at the Oscars include ‘Silence of the Lambs,’ ‘The Exorcist,’ ‘Psycho,’ ‘Poltergeist’

9. LETHAL WEAPON series (1987, 1989, 1993, 1998)
The success of “Lethal Weapon” (1987) launched Gibson’s most financially lucrative franchise with a bang. The first film received (for an action film) surprisingly good reviews, thanks in large part to Richard Donner‘s deft direction, an effective mix of comedy and action in the witty script by Shane Black and the undeniable chemistry between Gibson and his co-star Danny Glover.

8. HAMLET (1990)
When Gibson, who was coming off two “Lethal Weapon” movies was first announced as esteemed director Franco Zeffirelli‘s choice to play Shakespeare’s famous Melancholy Dane, let’s just say that there was some skepticism in the film community.  The film admittedly opened to mixed to favorable reviews, but it was not nearly the catastrophe that many had predicted.

7. APOCALYPTO (2006)
For Gibson’s third directorial effort, he turned to the 1511 world of the Mayans to tell the story of Jaguar Paw, a tribesman who, after escaping from being the victim of a sacrifice, sets out to rescue his family from their Mayan village that is about to be destroyed.

6. THE PASSION OF THE CHRIST (2004)
The elephant in the room.  You can’t discuss Gibson’s career without tackling his controversial depiction of the final 12 hours in the life of Jesus Christ.  The film was an unexpected smash hit, earning more than $370 million in the United States alone, and this, despite the fact that the dialogue is not in English — all spoken words are in Latin and reconstructed Aramaic.

5. BRAVEHEART (1995)
Gibson’s most honored film recounts the life of William Wallace (Gibson), a Scottish warrior who led the Scots in rebellion against England’s King Edward I. Gibson gave a rousing performance as Wallace, but, although it was his first time behind the camera for a feature film, it was Gibson’s assuredness both in his direction of the action and character scenes that truly caught critics by surprise.

4. HACKSAW RIDGE (2016)
This may be a minority opinion, but I regard Gibson’s direction of his 2016 Oscar-nominated direction of “Hacksaw Ridge” to be much superior to his Oscar-winning work on “Braveheart.”  In his biography of World War II conscientious objector Desmond Doss (Andrew Garfield, in a terrific Oscar-nominated performance) who felt an obligation to serve but who was mocked for his anti-violence beliefs.

3. THE YEAR OF LIVING DANGEROUSLY (1982)
In his second successful collaboration with director Peter Weir, Gibson portrays Guy Hamilton, an Australian journalist who is plunked into the midst of a an attempted government coup in 1965 in Indonesia.  Guy has no contacts among other foreign correspondents stationed there, so he must rely on his local photographer contact, a male dwarf named Billy Kwan (Linda Hunt, who won an Oscar for her performance).

2. GALLIPOLI (1981)
Since his voice was dubbed for the American release of his breakthrough film, “Mad Max,” Gibson’s real voice was introduced to domestic audiences in Peter Weir‘s acclaimed film about the famed World War I battle at Gallipoli in the Ottoman Empire in what is now Turkey.

1. MAD MAX series (1979. 1981. 1985)
The original “Mad Max” (1979) was an Australian production that was acquired for U.S. distribution by American International Pictures (AIP), and while I bow to no man in my love for AIP, the company for the most part provided fodder for drive-in theaters. The kinetic direction of George Miller and the presence of Gibson were still there to make the film memorable.