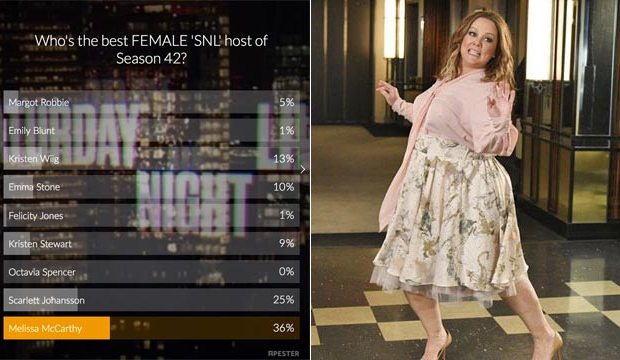 Of the nine women to host “Saturday Night Live” during its insanely viral 42nd season, 36% of our readers who voted in our poll say that Melissa McCarthy did the best job. McCarthy, of course, had an unfair advantage as she played White House press secretary Sean Spicer several times before finally acting as the show’s official host last week. In second place was Scarlett Johansson with 25% of the vote and, like McCarthy, she joined “SNL’s” exclusive Five-Timers Club on her fifth appearance.

McCarthy hosted the Mother’s Day episode on May 13 and during her charming monologue she took a mom from the audience on a fun backstage tour. She also proved to be a master of physical comedy as she took several pies and cakes to the face during a game show sketch. McCarthy has earned Emmy nominations on each of her former hosting appearances, so might she finally win this year?

Johansson hosted “SNL’s” March 11 episode and her best sketch was the one in which she played an ignorant reporter interviewing a zoo “pornographer.” She also starred in a viral perfume ad that implicated Ivanka Trump as “complicit” in her father Donald Trump‘s actions, and then played Kunk the mermaid opposite Kate McKinnon‘s grotesque Shud.

In third place with 13% of the vote is former “Saturday Night Live” cast member Kristen Wiig, followed by Oscar winner Emma Stone (“La La Land”) in fourth place with 10%. None of the other ladies earned double-digits in our poll, though Kristen Stewart came close with 9% support. Rounding out the rest of the bunch is Margot Robbie (5%), Emily Blunt (1%), Felicity Jones (1%) and Octavia Spencer (0%).