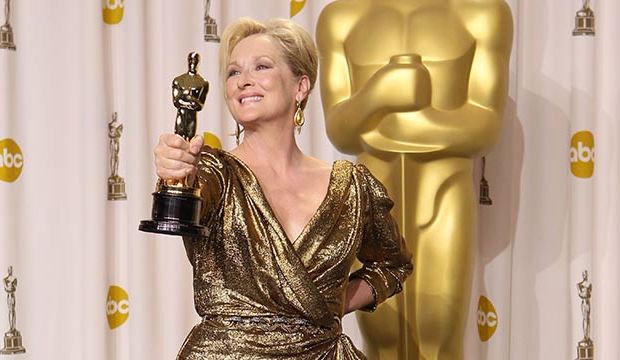 Meryl Streep is the queen of the Oscars and now she is the people’s champion as well, at least for the readers of Gold Derby. The legendary actress won our recent poll asking which Best Actress Oscar winner of the 2010s was your favorite. Streep won her third Oscar in 2011 for her transformative role playing the indomitable Margaret Thatcher in “The Iron Lady.”

Streep was the clear winner of our poll, receiving 46% of the vote, higher than the totals of the two next highest finishers combined. The runners-up were Cate Blanchett (“Blue Jasmine”) and Jennifer Lawrence (“Silver Linings Playbook”), who each earned 18%. From there it was a huge drop-off, with Natalie Portman (“Black Swan”) coming in fourth place at 8%, Emma Stone (“La La Land”) in fifth with 4%, and Brie Larson (“Room”) and Julianne Moore (“Still Alice”) tying for last at 3% each.

The most nominated actor or actress in Oscar history, Streep has been one of the most beloved performers in Hollywood since the late 1970s. Her previous two Oscar wins were for 1979’s “Kramer vs. Kramer” and 1982’s “Sophie’s Choice,” and she has racked up 20 nominations in total.

Streep stars in the upcoming Steven Spielberg film “The Post” as Katherine Graham, a role that could net her 21st nomination and possibly even a record-tying fourth win. She also has three Emmys and eight Golden Globes. Watch “The Post” trailer here.