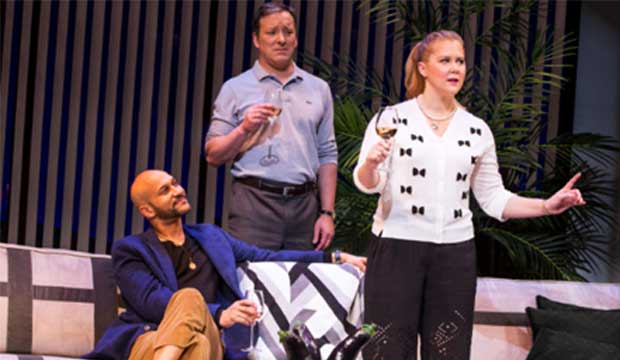 Only a year-and-a-half after his Broadway bow as a playwright, Steve Martin (“Bright Star”) has returned to the Great White Way with a new comedy “Meteor Shower,”which opened at the Booth Theatre on November 29.  Directed by the legendary Jerry Zaks, the show boasts a starry four-member ensemble of Broadway veterans Laura Benanti and Jeremy Shamos and newcomers Amy Schumer and Keegan-Michael Key.

In the absurdist comedy, set in California in 1993 on the night of the Perseid meteor showers, married couple Corky (Schumer) and Norm (Shamos) host the combustible Laura (Benanti) and Gerald (Key) in what has been repeatedly touted as a riff on Edward Albee’s classic “Who’s Afraid of Virginia Woolf?”.

Critical reception to “Meteor Shower” varied greatly, but most reviews characterize the new play as a mixed bag. Marilyn Stasio (Variety) applauds Schumer’s “exuberant performance” and “buoyant portrayal of sexual abandon,” Key’s “riveting presence” and the “divine” Benanti, but critiques that “clever lines and canny body language only get you so far, and there comes a point when this lightweight comedy just gives up and implodes on itself from lack of thought and direction.” Barbara Schuler (Newsday) similarly notes that, “With a less-talented cast this would be a hot mess not worth the effort,” but says that the play gets redeemed by the performances, particularly the “side-splittingly funny” Schumer, as well as the “striking” scenic and lighting designs.

Along the same lines, Joe Dziemianowicz (Daily News) deems the play “puzzling” and “heavy with absurdity and modestly laced with laughs,” but also lauds Schumer, Key, and Benanti, who in particular “shakes high-test hilarity out of nothing more than her telling body language.” In a less-celebratory write-up, Jesse Green (New York Times) quips that Martin “is peerless at crafting tiny wit bombs, and always has been.  But unless you’re Oscar Wilde, tiny wit bombs do not make a satisfying play.” Green notes that director Zaks’ “slick production” is “bright and chipper,” but argues that it strikes “the wrong tone” for the piece and, unlike other critics, only really highlights Benanti, who “with her ludicrous self-pleasure and inscrutable intentions, achieves the perfect, heightened style to land the airy jokes while maintaining a bright, solid presence.”

DISCUSS ‘Meteor Shower’ with Broadway insiders in our notorious forums

With most critics underwhelmed by the play itself, “Meteor Shower” doesn’t look like a strong Best Play contender at the 2018 Tony Awards. Missing out on a bid for the top honor might not diminish the chances of a number of its actors, though. In particular, the show’s leading ladies both stand a solid chance of earning Tony bids next year. Of the two, Benanti probably has a slighter edge, in part because of her long history with the Broadway stage that includes ten credits, five Tony nominations, and one win in 2008 for her turn in the Patti LuPone-led revival of musical “Gypsy.” Schumer, who received a number of rapturous reviews, may have to overcome the Tony nominating committee’s occasional aversion to stars of the large and small screen turning toward the boards. Key and Shamos, the latter of whom has a previous Tony bid to his name for “Clybourne Park,” also received a fair share of critical kudos and could both be in the running, too.

Although director Zaks has eight Tony nominations to his credit, most recently for last season’s pitch-perfect revival of “Hello, Dolly!,” and has picked up four trophies (“Guys and Dolls,” 1992; “Six Degrees of Separation,” 1991; “Lend Me a Tenor,” 1989; “The House of Blue Leaves,” 1986), he looks unlikely to score a ninth bid for his work on “Meteor Shower.” His equally accomplished design team may fare better. Lighting designer Natasha Katz could land a bid for her applauded work of bringing the show’s title celestial effects to life on stage; she also has a long-running history with the Tonys with a whopping 14 nominations and six wins (“Long Day’s Journey Into Night,” 2016; “An American in Paris,” 2015; “The Glass Menagerie,” 2014; “Once,” 2012; “The Coast of Utopia,” 2007; “Aida,” 2000). Scenic designer Beowulf Boritt, who has one Tony (“Act One,” 2014) out of three nominations, also received a number of favorable notices. Estimable costume designer Ann Roth shouldn’t be ruled out either, with her seven previous Tony bids and win in 2013 for “The Nance,” although she will be in the unique position of competing with herself come time for nominations with her work on the upcoming production of Albee’s “Three Tall Women.”