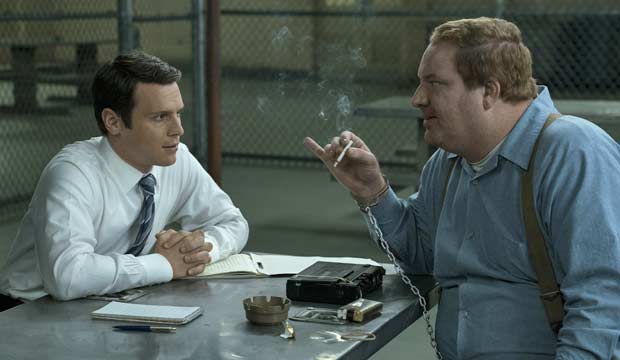 “I don’t think they’ve officially green-lit a second season,” said “Mindhunter” star Jonathan Groff when we chatted with him recently, and he didn’t want to jinx it. “Until I’m taking a shit in my trailer while we’re shooting I’m really not going to believe that this job is happening — that’s just my MO.” Well he can breathe a sigh of relief because the renewal became official when “Mindhunter” announced it on November 30 in an Instagram post. Scroll down to see that announcement as well as our video interview with Groff.

“We need to talk to more subjects. ‘Mindhunter‘ season 2 is coming,’ says the announcement, referencing the show’s central premise. The Netflix drama stars Groff as FBI Agent Holden Ford, who studies the criminal mind by interviewing real-life imprisoned serial killers including Ed Kemper (played by Cameron Britton) and Jerry Brudos (played by Happy Anderson). It’s based on the true-crime book of the same name by John E. Douglas, who was the inspiration for Holden Ford. Oscar nominated filmmaker David Fincher serves as an executive producer and also directed multiple episodes in the first season, revisiting similar true-crime territory that he previously explored in his 2007 film “Zodiac.” Charlize Theron, who won an Oscar for playing a serial killer in “Monster” (2003), is also an executive producer.

Even before the official renewal, Fincher expressed ideas about where season two would go in an interview with Billboard about the show’s musical choices: “Next year we’re looking at the Atlanta child murders, so we’ll have a lot more African-American music which will be nice. The music will evolve. It’s intended to support what’s happening with the show and for the show to evolve radically between seasons.” The Atlanta killings occurred between 1979 and 1981 and included as their victims more than two dozen black children and adults.

Are you looking forward to season two? See the official announcement below and watch our interview with Groff.

We need to talk to more subjects.