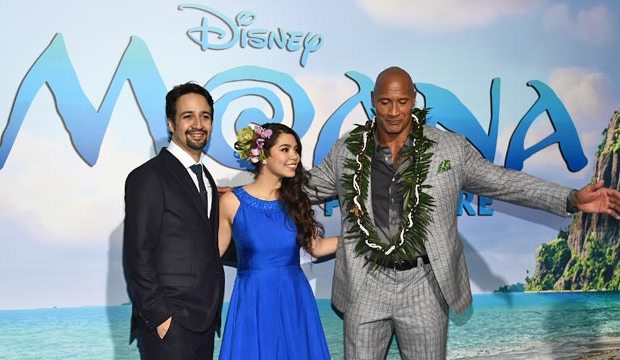 “La La Land” looks to be an unstoppable juggernaut at the Oscars, and the majority of awards watchers predict Best Song is one of many categories the movie will win on its path to Best Picture. So it would be easy to overlook Disney’s “Moana,” another stellar musical film this year, as a spoiler for Best Song. But a specific academy trend indicates a major upset by “Moana” is lurking for “How Far I’ll Go,” written by Broadway superstar Lin-Manuel Miranda (“Hamilton”).

“La La Land” stands in Miranda’s way with two song nominations: “Audition (Fools Who Dream)” and “City of Stars.” If the musical takes Best Picture, that would surely boost the odds for composer Justin Hurwitz and lyricists Benj Pasek and Justin Paul. But a look at past Best Song winners reveals that no musical movie with multiple song nominations has won the category since “The Lion King” in 1995, when “Can You Feel the Love Tonight” took that award over “Circle of Life” and “Hakuna Matata.”

“Dreamgirls” found itself with three nominated songs in 2007: “Listen,” “Love You I Do” and “Patience.” Many pundits thought “Listen” would take the prize thanks to a powerhouse performance from Beyonce and musicals’ histories of winning this category. But the votes were split and all three “Dreamgirls” bids lost to Melissa Etheridge’s “I Need to Wake Up,” featured in the environmental doc “An Inconvenient Truth.”

The same fate befell another musical, “Enchanted,” the following year. Alan Menken and Stephen Schwartz were nominated for three of their tunes: “Happy Working Song,” “So Close” and “That’s How You Know.” But these legendary Broadway artists lost to “Falling Slowly” from the modern musical “Once.” The crushing defeats of “Dreamgirls” and “Enchanted” prompted a rule change, limiting films to a maximum of two original song nominations.

This rule change didn’t help “The Princess and the Frog” in 2010. That animated musical failed to win Best Song despite being a double nominee for “Almost There” and “Down in New Orleans.” Both Randy Newman numbers lost to “The Weary Kind” by Ryan Bingham and T Bone Burnett from the music-driven “Crazy Heart.”

The last film with multiple Best Song nominations to win the category was “Slumdog Millionaire” in 2008. That Best Picture champ won for “Jai Ho” over its other offering “O… Saya.” There was no musical film in contention in that three-nominee lineup, as “Wall-E” was the only other film nominated.

It is also worth noting that Disney films have a stellar track record with this category, which bodes well for “Moana.” The company has amassed a whopping 13 wins for Best Song. Their first win came in 1941 for “When You Wish Upon a Star” from “Pinocchio,” which would go on to become the de facto theme song of the Walt Disney Company. Other victories followed with “Zip-a-Dee-Doo-Dah” (“Song of the South”), “Chim Chim Cher-ee” (“Mary Poppins”), “Under the Sea” (“The Little Mermaid”), “Beauty and the Beast” (“Beauty and the Beast”), “A Whole New World” (“Aladdin”), “Can You Feel the Love Tonight” (“The Lion King”), “Colors of the Wind” (“Pocahontas”), “You’ll Be in My Heart” (“Tarzan”), “If I Didn’t Have You” (“Monster Inc”), “We Belong Together” (“Toy Story 3”), “Man or Muppet” (“The Muppets”), and “Let it Go” (“Frozen”).

Musicals have taken Best Song 33 times since the category’s introduction in 1935, including the first winner “The Continental” from “The Gay Divorcee.” But, history tells us that voters can have difficulty uniting behind one song when given multiple options. If votes are split between “La La Land’s” two popular numbers, the academy may opt for another comfortable option: rallying behind the empowering “How Far I’ll Go” from “Moana.”

Miranda has three Tonys, two Grammys, an Emmy, a Pulitzer Prize, and the power of Disney behind him, so don’t count out “Moana” for Best Song. The “Hamilton” creator is just an Oscar win away from becoming the youngest ever EGOT winner. At 37, Miranda would squeak by “Frozen” composer Robert Lopez who was 39 when he completed his EGOT.