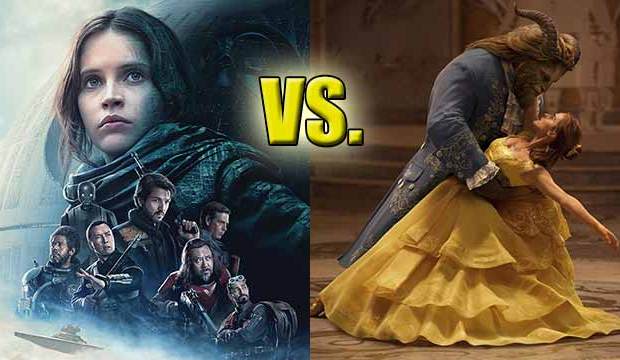 The race for Movie of the Year at the MTV Movie and TV Awards is neck-and-neck according to our racetrack odds. “Rogue One: A Star Wars Story” has a slight advantage with odds of 3/2, but “Beauty and the Beast” is right on its heels with odds of 21/10.

“Rogue One” only has two nominations at these awards — star Felicity Jones also contends for Best Hero — but that may not matter. The winners are strictly decided by fans voting online, and “Star Wars” certainly has many online fans. Last year “Star Wars: The Force Awakens” won three awards out of its 11 nominations, including Movie of the Year. It’s true that “The Force Awakens” had more acclaim and bigger box office, but that may be an unfair comparison. “Rogue One” made more than $1 billion worldwide, including $532 million domestic, so it can hardly be considered a disappointment.

“Beauty and the Beast,” a live-action remake of Disney’s 1991 animated classic, was also a $1 billion global blockbuster. It has the benefit of more nominations: Best Actor in a Movie (Emma Watson), Best Duo (Luke Evans and Josh Gad) and Best Kiss (Watson and Dan Stevens). It was also released more recently than “Rogue One,” which means it’ll be fresher in the minds of fans. And younger-skewing romances have had a strong track record at the MTV Movie Awards in recent years. The “Twilight” films won Movie of the Year four years in a row (2009-2012), and “The Fault in Our Stars” took the top prize in 2015.

“Rogue One” and “Beauty and the Beast” will both have to watch out for “Get Out,” which is the most nominated film or TV show this year with six citations and ranks third with 10/3 odds. It wasn’t as big a blockbuster as either of its top rivals, but again those comparisons may be misleading. “Get Out” has made almost $200 million worldwide against a $4.5 million budget. And it has so much buzz and acclaim that its fans may be even more passionate about rallying behind it. This could be reminiscent of the 1997 race, when the cult hit horror film “Scream” defeated action blockbusters “Independence Day” and “The Rock.”

“Logan” is in fourth place with 9/2 odds. The acclaimed superhero sequel was a huge hit when it was released in early March, and it’s also nominated for Best Actor in a Movie (Hugh Jackman) and Best Duo (Jackman and Dafne Keen). It’s the fourth film set in the “X-Men” universe nominated for Movie of the Year, following “X-Men” (2001), “X2: X-Men United” (2004) and “Deadpool” (2016), but none have won.

Rounding out the category with 5/1 odds is the smallest film in the race, the coming-of-age comedy “The Edge of Seventeen.” It did earn a Golden Globe nomination for its star Hailee Steinfeld, who now contends for Best Actor in a Movie, but it may struggle for support going up against a slew of box office behemoths. However, it wouldn’t be the first indie hit to win Movie of the Year: “Napoleon Dynamite” prevailed in 2005.

Hugh Jackman ('Bad Education') on Wolverine vs. the Hulk at the Emmys [Complete Interview…