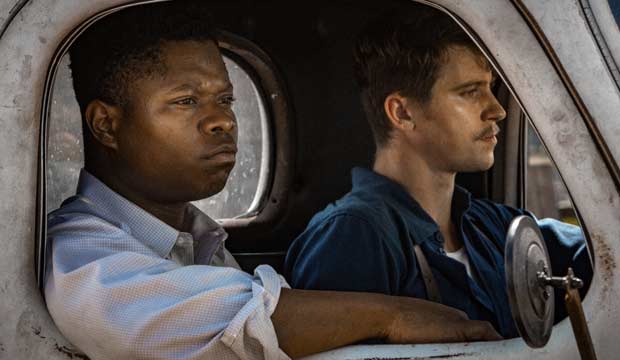 Netflix could be poised to enter the Oscar race in a big way this year with “Mudbound.” Based on the novel by Hillary Jordan, the film follows two World War II veterans – one white (Garrett Hedlund) and one black (Jason Mitchell) – who return home to work with their respective families on a farm in rural Mississippi, where they struggle to deal with racism and PTSD. Gold Derby recently chatted with stars Mitchell and Mary J. Blige, writer/director Dee Rees, and writer Virgil Williams about their work on the period drama.

Although the story of “Mudbound” is set over 70 years ago, Rees finds it vitally important to today. “As a country, we have not really addressed our national history,” she divulges. “If you can’t take on our national history, we can certainly each look at our personal histories.” She adds, “Everything that’s happening in our country lets us know that we’ve always been this way. This is not new, and this is a moment where we can decide to change if we talk about our inheritance, and… how we’re going to spend it going forward.”

Blige recently received Golden Globe, SAG Awards, and Critics Choice nominations for her supporting performance as Ronsel’s mother, Florence. The actress describes her character as “a very strong woman,” but also, “a different kind of woman” from modern times. Women in the 1940s “had to be more silent and powerful than boisterous. You see everything on her face. She’s really full of expression. She’s a powerful, silent woman, and she’s got a lot of love in her.” Blige based Florence on women in her own life, particularly her aunt: “When I was a kid, my mom would send us down South every summer, and I saw this woman. I knew this woman very well.”

Mitchell reaped a SAG Awards cast (along with Blige) bid for the film (he previously competed for “Straight Outta Compton” in 2015). He views Ronsel as “a very militant-minded guy. Even though he has a lot of love in his heart, he’s not afraid. He stands for something, and if you don’t stand for something, you’ll fall for anything.” Ronsel becomes, “this sort of voice for black men who have been through this struggle, and they couldn’t say anything. No matter what happened to him, he didn’t put his head down, he never ran.”

Like Rees, Williams finds the film to be especially prescient in this day and age. “It’s a movie about a particular era in our country, but you look at the climate and the times as they are now, and the more things change, the more they stay the same.” Yet he finds hope within the film as well. “What people are getting a look at is who we were, and in that look we see who we are, and in that look we maybe see who we can be.”