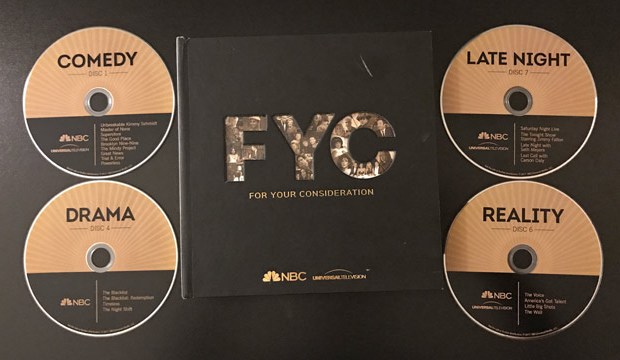 NBC and Universal Television’s all-inclusive 2017 Emmy FYC mailer has arrived on the doorsteps of the entire TV academy membership of 20,000. The single booklet contains a whopping 43 programs on nine DVDs, including reigning Emmy winners “Saturday Night Live” (Best Comedy Supporting Actress for Kate McKinnon), “Master of None” (Best Comedy Writing for Aziz Ansari and Alan Yang) and “The Voice” (three-time champ for Reality-Competition Program). A link is also provided for voters to watch even more episodes online at the Universal screening room.

Rounding out the FYC mailer are Universal TV’s plethora of reality shows. The competition contenders are “America’s Got Talent,” “American Ninja Warrior,” “The Voice” and “The Wall,” the unstructured entries are “Better Late Than Never” and “First Dates,” and the structured program is “Little Big Shots.”

First-time 'SNL' host Selena Gomez absolutely, positively does NOT have ants in her pants…