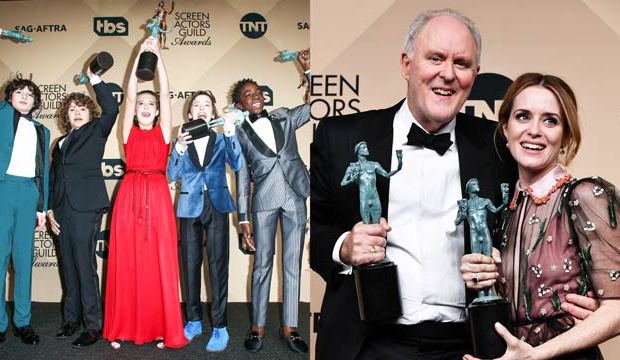 At the SAG Awards in January, Netflix swept the drama races with the cast of “Stranger Things” winning Best Drama Ensemble while “The Crown” players Claire Foy and John Lithgow took home the individual acting prizes. That was only the second time in the 23-year history of these kudos that one network won all three of the drama categories.

In 2003, HBO had pulled off this triple play when the “Six Feet Under” cast claimed the ensemble award and “The Soprano” stars Edie Falco and James Gandolfini prevailed in the individual races. At the Emmys that fall, both these shows lost the Best Drama Series award to “The West Wing,” which won a fourth year running. However, Falco and Gadolfini did pick up their third Emmy each to add to their crowded mantles.

SAG does not distinguish between lead and featured performances on the TV side and Lithgow was the first supporting player to win this award. That victory made him the first performer to prevail for both drama and comedy as he had won in the latter back in 1997 and 1998 for “3rd Rock from the Sun.”

Our current odds have “Stranger Things” in first place in a tight race for Best Drama Series. However, Lithgow is far out front to win in the supporting race at the Emmys for his portrayal of British prime minister Winston Churchill. Should he prevail as predicted, he will be the first Best Drama Supporting Actor winner to have done for playing a real-life role.

Lithgow’s leading lady, Claire Foy, won raves for her sensitive portrayal of the young Queen Elizabeth II. But, despite winning both the SAG and Golden Globe awards, she is in second place at the Emmys, behind perennial also-ran Elisabeth Moss. After all those losses for “Mad Men,” she is tipped to finally prevail for the first season of the Hulu hit “The Handmaid’s Tale.” Were Foy to pull off an upset, she would become just the fourth woman to have swept all three awards.

Be sure to make your Emmy predictions so that Hollywood insiders can see how their TV shows and performers are faring in our Emmy odds. You can keep changing your predictions until just before winners are announced. And join in the fierce debate over the 2017 Emmys taking place right now with Hollywood insiders in our TV forums.