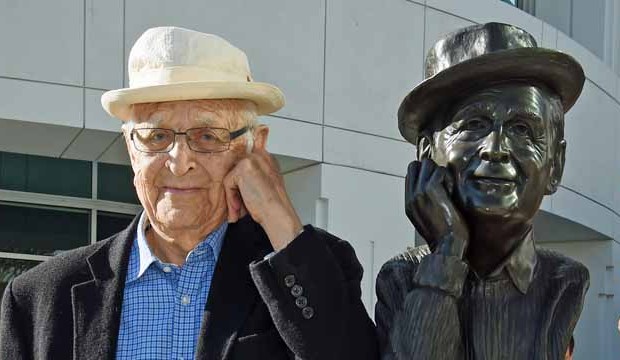 Among this year’s five artists recognized by the Kennedy Center Honors for his contributions to American culture is Norman Lear. The celebrated writer and producer started with “All in the Family” in the 1970s and developed a series of groundbreaking programs that dramatically changed the television landscape. Let’s take a flashback look at his awards career, with a special focus on his dominance at the Emmy Awards for many years.

Lear, who early in his career garnered a Best Original Screenplay Oscar nomination (for “Divorce American Style” in 1967) is hardly a stranger to recognition for his endeavors. He is the recipient of four Emmy wins, all for producing “All in the Family,” and a total of 15 Emmy nominations, including honors for his producing of the series “Maude” and “Mary Hartman, Mary Hartman.”

Beyond the Emmys, Lear was also honored by the Peabody Awards in 1978 for his efforts on “All in the Family” and is the recipient of lifetime achievement prizes from, among other groups, the Producers Guild of America, Writers Guild of America and Television Critics Association. Lear was also among the first inductees – alongside Lucille Ball, Milton Berle, Paddy Chayefsky, Edward R. Murrow, William S. Paley and David Sarnoff – and by the far the youngest named into the inaugural Television Academy Hall of Fame in 1984.

For his legendary portrayal of Archie Bunker, Carroll O’Connor captured four Emmy wins (in 1972, 1977, 1978 and 1978) and one Golden Globe (in 1972) while leading lady Jean Stapleton, playing the beloved Edith Bunker, won three Emmys (in 1971, 1972 and 1978) and two Golden Globes (in 1973 and 1974). Rob Reiner scored two Comedy Supporting Actor Emmys (in 1974 and 1978) for his portrayal of Mike “Meathead” Stivic, while Sally Struthers, as the Bunkers’ daughter Gloria, won her pair of Comedy Supporting Actress Emmys in 1972 and 1979. Also picking up an acting trophy was Betty Garrett, winning the TV Supporting Actress Golden Globe in 1975 for her turn as Irene Lorenzo, neighbor and nemesis of Archie.

In total, “All in the Family” took home 22 Emmy wins on 54 nominations and eight Golden Globe victories on 30 nominations there. The series also won four Directors Guild of America Awards and a Writers Guild of America trophy to boot. In 2013, the Television Critics Association honored the series with its Heritage Award in honor of its cultural impact on television and society.

While none of Lear’s series to follow would quite match the stupendous strength of “All in the Family” during awards season, his productions were still ratings sensations and forces to be reckoned with at the Emmys and Golden Globes.

“Sanford and Son,” which hit the small screen in 1972, garnered a pair of Comedy Series Emmy nominations (in 1972 and 1973) but it was iconic, scene-stealing leading man Redd Foxx, portraying the cantankerous Fred Sanford, who reaped most of the show’s recognition. Foxx won the Comedy Actor Golden Globe in 1973 and would receive three more Globe nominations over the years to follow, plus three Emmy nominations.

“Maude,” the first of several “All in the Family” spin-offs to grace the small screen, was also a Comedy Series Emmy nominee (in 1973), with leading lady Bea Arthur, playing the unabashedly progressive Maude Findley, winning her Comedy Actress Emmy for the show’s fourth season in 1977. Arthur’s victory marked the series’ sole win on its 12 Emmy nominations. The show also garnered eight Golden Globe nominations, with one win – in TV Supporting Actress in 1976 for Hermione Baddeley‘s portrayal of spirited housekeeper Mrs. Naugatuck. There were four Directors Guild of America Award nominations and two Writers Guild of America Award nominations too, with one victory from the latter, for “Walter’s Problem” in 1974.

Then, there was a spin-off of a spin-off – “Good Times,” which starred Esther Rolle as Florida Evans, Maude’s first housekeeper. While a ratings hit, “Good Times” did not fare quite as well with awards as past Lear productions, failing to garner a single Emmy nomination over its six-season run. The Golden Globes proved a little more receptive, as Rolle received a TV Comedy Actress nomination in 1975 and Jimmie Walker scored two TV Supporting Actor nominations (in 1975 and 1976) for his memorable portrayal of James “J.J.” Evans.

The longest-running of Lear’s “All in the Family” spin-offs was “The Jeffersons,” which debuted to incredible ratings in 1975 and would run for a remarkable 11 seasons. Despite its success, the show never received a Comedy Series Emmy nomination. Of its 14 Emmy nominations, all but one (a Video Tape Editing win in 1983) were in honor of stars Isabel Sanford, Sherman Hemsley (nominated only once, in 1984) and Marla Gibbs. Of the three actors, only Sanford, as matriarch Louise “Weezy” Jefferson, scored a win, in 1981. Sanford marked the first (and to date, only) African-American to win the Comedy Actress Emmy. Over its run, “The Jeffersons” also received eight Golden Globe nominations, including five for Sanford, with no victories.

A favorite of the Golden Globes was “One Day at a Time,” which won Valerie Bertinelli two TV Supporting Actress prizes (in 1981 and 1982) for her portrayal of Barbara Cooper, youngest daughter of single mom Ann (Bonnie Franklin, who picked up two Golden Globe nominations and one Emmy nomination for her leading turn). Pat Harrington, Jr., playing eccentric building superintendent Schneider, also won a Golden Globe for the series (in 1981) and in 1984 won the Comedy Supporting Actor Emmy for the show’s final season. “One Day a Time” also received an Emmy in Comedy Directing, in 1982 for “Barbara’s Crisis.”

The most recent Lear series to make a significant awards season showing was “Mary Hartman, Mary Hartman,” a soap opera satire that had a daily, weekday run in syndication from 1976 to 1977. Now considered a cult classic, the series hardly received an “All in the Family”-level reception during its initial run but still made a showing at the Emmys, winning a prize in 1976 for Special Classification of Outstanding Program and Individual Achievement. Leading lady Louise Lasser was nominated for her turn as the title character in 1976 and the following year, Mary Kay Place scored the Comedy Supporting Actress Emmy for her portrayal of Mary’s best friend Loretta.

Since prevailing with “All in the Family” in Comedy Series in 1973, Lear has not won an Emmy Award. In fact, his last nomination came more than 25 years ago, in 1991 for his producing of the 20th anniversary special of “All in the Family.” Still active in the industry, however, serving as executive producer on Netflix’s much-praised “One Day at a Time” reboot, there remains plenty opportunity for this living legend to make a triumphant Emmy return.