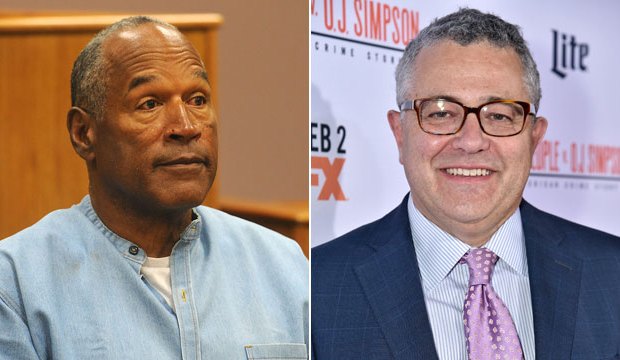 “I think it was the right decision,” confessed CNN analysis Jeffrey Toobin about the news of the O.J. Simpson parole. Toobin wrote the book “The Run of His Life” that served as the basis of FX’s 2016 limited series “The People v. O.J. Simpson.” That TV program went on to win nine Emmy Awards last year including Best Limited Series, Best Actress for Sarah Paulson, Best Actor for Courtney B. Vance and Best Supporting Actor for Sterling K. Brown. In the miniseries, Simpson was portrayed by Oscar winner Cuba Gooding Jr. (“Jerry Maguire,” 1996).

On Thursday, after a Nevada parole board voted unanimously to grant Simpson early release for his 2008 conviction of threatening memorabilia dealers in Las Vegas, Toobin spoke with CNN’s Anderson Cooper about the big news. Toobin admitted that he wasn’t surprised Simpson was granted early release, noting, “My understanding of the Nevada rules made it very likely that he was going to be paroled.”

Toobin continued, “As much as I think that O.J. Simpson should be serving life in prison for the murders of Ron and Nicole, he was acquitted. And I thought this sentence was excessive.” Toobin was referring to the brutal double murders of Ron Goldman and Nicole Brown Simpson in 1994, which Simpson was found not guilty of committing in the infamous criminal trial.

“I believe with all of my heart and all of my brain that O.J. is guilty of the murders. I have absolutely no doubt about that,” Toobin declared. However, he also added, “I thought this whole Las Vegas case was basically payback. As much as I would have liked to have seen him convicted in the original case, that’s not how I think the legal system should work. And nine years for that case I just thought was too much.”

And at this year’s Oscars, a documentary of Simpson’s crimes titled “O.J.: Made in America” won Best Documentary Feature, proving that America’s obsession with the former football star is far from behind us. Below, watch our recent interview with Sarah Paulson where she reflects on playing embattled prosecutor Marcia Clark.