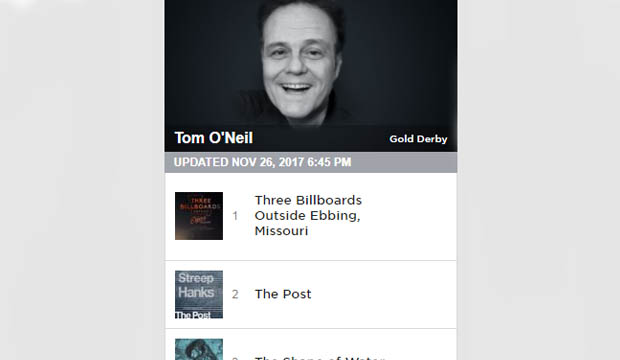 While fretting (and fretting) over my Oscar predictions for Best Picture yesterday, I suddenly made a daredevil – and perhaps derelict – move for a pundit. I dropped “The Post” for “Three Billboards Outside Ebbing Missouri” and I feel pretty smug about it (for now).

Let the record show that I did so on Nov. 25 – three days before the first batch of top awards comes out. I’m planting my flag now because I want to own this thing in case, let’s say, the National Board of Review picks it on Tuesday … or the critics’ awards start piling on soon thereafter and suddenly everybody’s on my “Billboards” bandwagon.

Right now only 237 people pick “Billboards” out of 4,300 regular users making predictions at Gold Derby. Of our 25 Experts (see rankings), only one other brave Oscarologist is out on that thin, shaky “Billboards” limb with me: Brian Truitt (USA Today). Fifteen other Experts back “Dunkirk” – that’s the runaway fave. Two pundits opt for “The Post” (2). All alternative ponies get one vote each: “Shape of Water,” “Call Me By Your Name,” “Darkest Hour,” “Get Out,” “The Florida Project,” “Lady Bird” and “Mudbound.”

None of my fellow Gold Derby Editors agrees with Brian and me. (See rankings.) However, here’s something very curious: Most of our Top 24 Users (who had the best scores predicting Oscar noms at Gold Derby last year) join me and Brian backing “Three Billboards” (9), compared to 6 picking “Shape of Water” and 5 riding “Dunkirk.” (See rankings.) However, “Three Billboards” drops back to second place behind “Dunkirk” in the predictions of our Top 24 All Stars (who had best scores over the past two years).

Why am I doing such a loopy thing? It’s the preferential ballot, stupid. As we’ve learned, quite painfully, over the past few years while this new voting system has been in effect, upsets in the Best Picture race occur again and again because the winner isn’t necessarily the film with the most number-one votes. Contenders triumph by snagging the most number 1, 2 and 3 votes.

Last year, I suspect “La La Land” had the most top votes, but it was divisive. People either loved it or loathed it. Voters probably ranked it number 1 or number 4 or 5. Everybody liked “Moonlight” even if they didn’t really think it was the Best Picture of the year. If some academy members voted for “Hidden Figures” or “Manchester by the Sea” and eschewed all of that industry gushing over “La La,” they probably put “Moonlight” in second or third place and so it turned out to be the nominee with the most consistent high-ranking support. However, only 2 out of 30 Experts at Gold Derby chose “Moonlight” over “La La” (congrats to Sasha Stone and Matt Atchity).

Ditto for the previous Oscar season when “The Revenant” was preferred by 16 of 28 Experts. Only 8 spotted the real derby champ: “Spotlight” (including me). Four bet on “The Big Short.” The reason “Spotlight” pulled off that jawdropper was because it had passion behind it and “The Revenant” was admire-it-or-hate-it. I have a strong hunch that “Revenant” had the most top votes.

This year I’m hearing consistent adoration across Hollywood for one film: “Billboards.” It’s everybody’s private discovery, one they feel personally vested in, even if they tell me that they believe “Dunkirk” or “Shape of Water” will win Best Picture. When I ask them, “So why aren’t you picking ‘Billboards’ to win?” they shriek in horror: “Oh, my God, it’s too weird! Too small! Too quirky! Oscar voters will never go for that!”

I think I’ve seen this scenario before. Looking at the derby ahead, I reserve my right to change my prediction, but I suspect I’m onto something here. I think I’ll ride this magnificent pony for now.