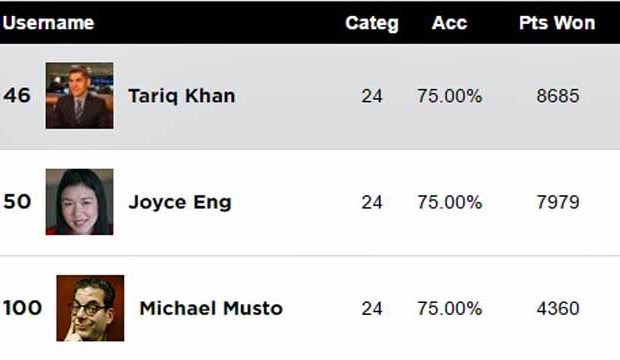 Congratulations to our Experts Joyce Eng (TV Guide), Tariq Khan (Fox News), and Michael Musto (Out.com) for an excellent score of 75% when predicting the 2017 Oscars winners on Sunday. They were on top in making their picks of 30 Experts, journalists who cover the entertainment industry throughout the year.

Over 5,400 people worldwide predicted these winners for 24 Academy Awards categories. Our top scorers got a tremendous 18 of the 24 categories correct. On a night filled with upsets, none of our three best Experts picked the shocking upset of “Moonlight” over “La La Land” for Best Picture, but that was the winning choice of Matt Atchity (Rotten Tomatoes) and Sasha Stone (Awards Daily). Other surprises for the evening included Casey Affleck in “Manchester by the Sea” (slight upset for Best Actor), “Fantastic Beasts and Where to Find Them” (Best Costume Design), “Hacksaw Ridge” (Best Film Editing and Best Sound Mixing), “Arrival” (Best Sound Editing), and “Suicide Squad” (Best Makeup and Hairstyling).

You can see how your score compares to all others in our leaderboard rankings of all contestants, which also includes links to see each participant’s predictions. to see your own scores, go to the user menu in the top right corner of every page of Gold Derby when you’re signed in to the site. Use drop down menu to go to “View Profile,” then look for the links to your “Award Show Scores.”

We now move on to another big event, so be sure to make your Emmy predictions. Weigh in now with your picks so that Hollywood insiders can see how their TV shows and performers are faring in our Emmy odds. You can keep changing your predictions until just before nominees are announced on July 13. And join in the fierce debate over the 2017 Emmys taking place right now with Hollywood insiders in our TV forums.